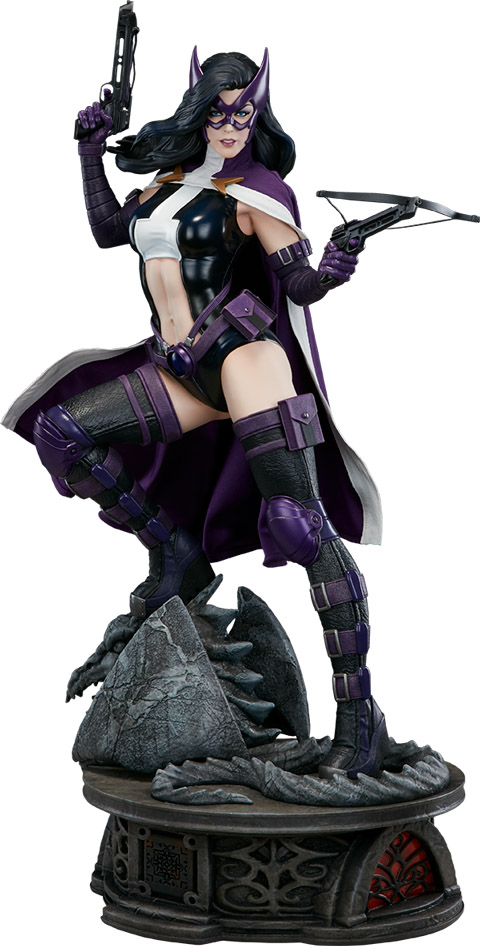 Helena Bertinelli or Helena Wayne? The Huntress Premium Format Figure can be either one, or maybe both at once, although that would be weird.

Whether you envision her as the dark hunter of the mob or as the daughter of Batman and Catwoman, this 23-inch-tall statue is awesome. The highly-detailed figure features the Huntress in a stylized version of her iconic black and purple costume, and the exclusive Sideshow Collectibles figure includes an alternate left arm that lets the character wield two crossbows at once or a crossbow and a staff.

The Huntress Premium Format Figure will be available Sep 2017 – Nov 2017 but it can be pre-ordered now for $469.99 at Sideshow Collectibles.

It looks like Michonne is living up to her title with The Walking Dead Huntress T-Shirt as she stands triumphantly over her latest prey. The shirt features Michonne in the woods with her two zombie pets standing over a Walker that has quite literally lost […]

Peter Parker shows off some awesome moves with The Amazing Spider-Man Premium Format Figure as the Green Goblin attempts to blow the wallcrawler into tiny spidey bits. Spider-Man, wearing his classic costume, leaps over exploding pumpkin bombs, ready to shoot webbing at his opponent. The […]

The DC Universe is busting at the seams with heroes but almost all of them are packing some serious testosterone. The DC Comics Power Girl and Huntress Action Figure 2-Pack proves there are a few women that are capable of dealing with the bad guys. […]