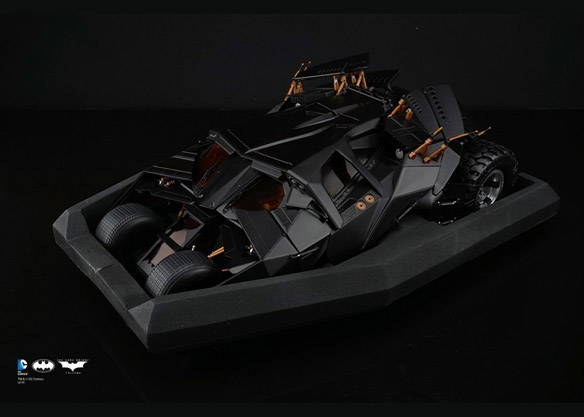 Get ready to patrol the mean streets of Gotham City (or your home) with the Dark Knight Trilogy Tumbler (Driver Pack), which can be controlled with an IOS or Android App.

Were you impressed by the Remote-Control 1989 Batmobile? It’s very cool… but it’s missing a very important element the Tumbler has – it’s an actual remote-control car that can go from Point A to Point B.

With the IOS or Android mobile app, it’s possible to send Batman on patrol across the floor of your living room, while also being in control of cool features like cockpit and spoiler movements, 16 super-bright LEDs, engaging Power-Jet mode, and recording the Tumbler’s path so you can play it back and watch it later.

Did I mention Batman? Yes, I did because the Tumbler also comes with a 1:12 Batman figure with 26 points of articulation. Because what good is an awesome Tumbler if there’s not a Batman to beat up the bad guys? You have to provide your own bad guys.

The Dark Knight Trilogy Tumbler (Driver Pack) is available for $513.42 at SoapStudio.

Exterminate thirst with this geektastic Dalek Tumbler Set. These cups look just like the Doctor’s arch-enemies, but with straws sticking out of their heads. You get a set of 5 in 5 colors: red, orange, yellow, blue, white. These tumblers will hold 16 ounces of […]

Just in case you don’t think your kids are destructive enough, you can now put them in the Child Piloted Tumbler and watch the neighborhood chaos ramp up to near apocalyptic proportions. Okay, maybe letting the little ones roll around in an inflatable honeycomb structure […]

The Tumbler is one of the coolest things about the rebooted Batman movies and now you can enjoy this new-age Batmobile on your wall. While not as large as the original Tumbler, the Batman Movie Tumbler Life Size Decal measures 6’8″W x 3’H and is […]

This Game of Thrones Silver Tumbler Set of 2 will give you some elegant vessels to drink from while watching the hit HBO show. You get a set of two glass tumblers. One glass has the Stark sigil, while the other has the Targaryen sigil. […]