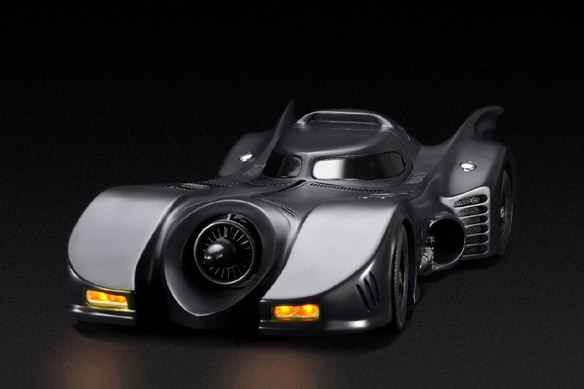 The coolest Batmobile to ever blast through the streets of Gotham City on the big screen is now available as the Remote-Control 1989 Batmobile, and it looks awesome.

Based on the Batmobile used in Tim Burton’s 1989 Batman, this car is packed with all kinds of goodies… or wonderful toys, as Jack Nicholson’s Joker would probably say.

Manufacturer Update: The pop-off machine gun covers (as seen in the second photo of the gallery have been replaced by covers that raise while remaining attached to the vehicle.

The Remote-Control 1989 Batmobile is available for pre-order at Cinemaquette for $2,500.

You may not be able to drive the Batmobile, but at least this 1989 Batmobile Keychain will let you keep batman’s ride with you at all times. Keep your keys together on this Batmobile keychain. It was created using digital files from Warner Bros. and […]

You are going to love this Batman 1989 1:24 Scale Batmobile with Batman 3-Inch Bendable Figure. It’s like it is 1989 all over again. Superhero movies are just about to make a comeback and Michael Keaton is Batman. It was a great time to be […]