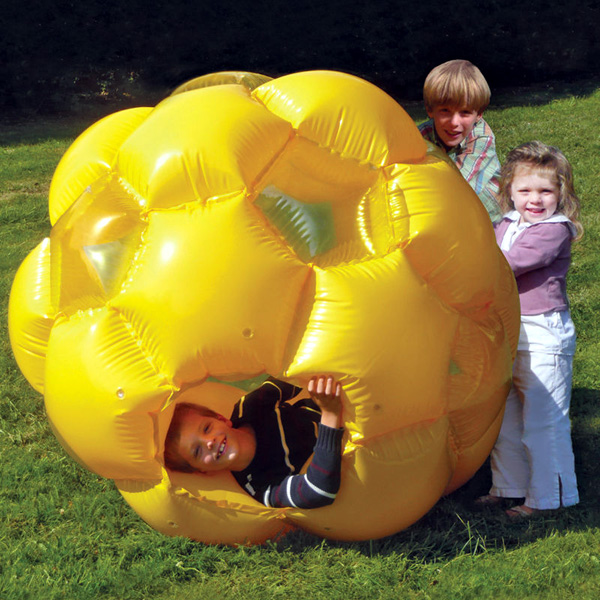 Just in case you don’t think your kids are destructive enough, you can now put them in the Child Piloted Tumbler and watch the neighborhood chaos ramp up to near apocalyptic proportions.

Okay, maybe letting the little ones roll around in an inflatable honeycomb structure won’t herald the end of the world, but it’s sure to provide laughs for both spectators and ‘pilot.’

The Tumbler (not to be confused with Batman’s ride) is made of heavy-duty 1/8-inch-thick PVC, with 30 hexagonal chambers forming the round(ish) shape. Ten transparent chambers provide plenty of visibility, letting the now extremely mobile tyke to avoid obstacles and home in on his or her target with ease. This ride isn’t just for the little ones either because it supports up to 100lbs. Go ahead and hit the scale real quick to see if you qualify for the role of pilot. I’ll wait.

In addition to providing the ability to turn people into living, breathing bowling pins, this yellow globe of destruction is also a good form of exercise because it’s powered and steered by the pilot’s shifting body weight.

Put a little rolling terror into your summer with the Child Piloted Tumbler for $79.95 from Hammacher Schlemmer.

Do you like Zombies?  Are you looking for a way to blow off steam or just have a good time with friends?  How about trying Zombie Desktop Bowling.  This is a perfect party game or office game for when you take that much needed break.  […]

Ever go bowling and be on such a winning streak that it almost feels like you’re the ball? That feeling takes on a whole new dimension when you actually become a Human Bowling Ball. Bowling is fun but the downside is it basically becomes a […]

The Tumbler is one of the coolest things about the rebooted Batman movies and now you can enjoy this new-age Batmobile on your wall. While not as large as the original Tumbler, the Batman Movie Tumbler Life Size Decal measures 6’8″W x 3’H and is […]

This Game of Thrones Silver Tumbler Set of 2 will give you some elegant vessels to drink from while watching the hit HBO show. You get a set of two glass tumblers. One glass has the Stark sigil, while the other has the Targaryen sigil. […]

Get ready to patrol the mean streets of Gotham City (or your home) with the Dark Knight Trilogy Tumbler (Driver Pack), which can be controlled with an IOS or Android App. Were you impressed by the Remote-Control 1989 Batmobile? It’s very cool… but it’s missing […]

Exterminate thirst with this geektastic Dalek Tumbler Set. These cups look just like the Doctor’s arch-enemies, but with straws sticking out of their heads. You get a set of 5 in 5 colors: red, orange, yellow, blue, white. These tumblers will hold 16 ounces of […]

Isn’t it a pain to always be on the run from flesh-starved zombies? Doesn’t it make you just want to rip off the undead thing’s head and toss it towards some bowling pins? Well, if the urge strikes you and no zombies are around, you […]

Are you a foodie who wants to gamble on the next meal? This Foodie Dice Tumbler is all you need. Just roll the dice for your next meal and then get cooking. These dice provide you with over 186,000 possible food combinations. And yes, bacon […]

GeekAlerts has shown you some great sets of pint glasses and shot glasses these last few months and I expect that quite a few you have a large collection by now. But that doesn’t mean we’re going to stop showing them to you. The Marvel […]