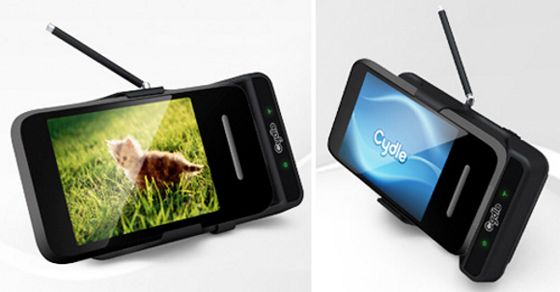 Can you believe it’s been over three years since we last talked about portable television sets? The TV in question being the Freeview TV from Yundai that features a 4.3-inch LCD screen? It really has been a while and the developments in internet television as well as with online video streaming has been vast and numerous. If you’re a fan of convenience and portability as well as television and have already got an iPhone, then the Cydle i30 TV Tuner might be something you’d like to look into.

The name probably already says it all. The Cydle i30 TV Tuner is a tiny device that latches on to your Apple smartphone and looks like a stand with a couple of antennas poking out on one side. It has a rechargeable battery built in, so you don’t have to worry about it leeching on to your iPhone’s battery while you stream some live TV content. (That’s right, live coverage on the go is a reality with the Cydle i30.)

The Cydle i30 TV Tuner is currently going through the FCC so you should expect word from Cydle about it soon.

Musicians will find this Solar Guitar Tuner very handy and of course environmentally friendly. It will fit right in your pocket and is solar-powered with 12 tone equal temperament tuning. No sunlight at your current gig? No problem. It also charges over USB. You will […]

I was extremely pleased with my iPhone 4’s battery power the first few months after I got it. But like every other battery, the one on my smartphone just began to deteriorate. I stopped playing my games on the iPhone for that reason. But if […]

Cell phones are great for fun and games, and they’re especially handy during emergencies… except when they lose power and there’s no way to recharge, but the Eton Hand-Crank Emergency Cell Phone Charger will let you scratch that particular worry off your list. If you’ve […]