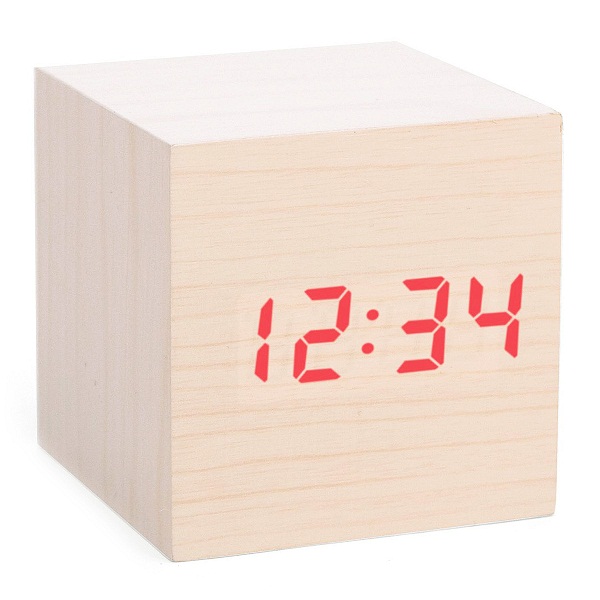 Want to keep track of time in a stylish, secretive way? The Cube LED Alarm Clock takes the idea of decorative minimalism and cranks it up to 11… or maybe it’s better to say it cranks it down to -11 because you don’t get much more minimal than a simple block of wood.

Although it appears to be nothing more than a palm-sized cube with a pale, faux wood finish, the clock comes to life and reveals its true time-telling nature with a clap of your hands or a knock on the table, displaying the time in a red, digital display for eight seconds before quietly blending back into the woodwork (heh!)

Of course, it’s sometimes necessary for time to be less subtle so the alarm clock feature can be used for those times when time is actually a big deal. I was wondering how many times I could use time in one paragraph, but I guess it’s time to stop that.

The clock only has four buttons so operating is as simple as its appearance and it runs on 2 AAA batteries so you don’t even have to worry about a cord messing up the illusion of this little block of wood being much less than it appears to be.

The Cube LED Alarm Clock is available at Uncommon Goods for $32.