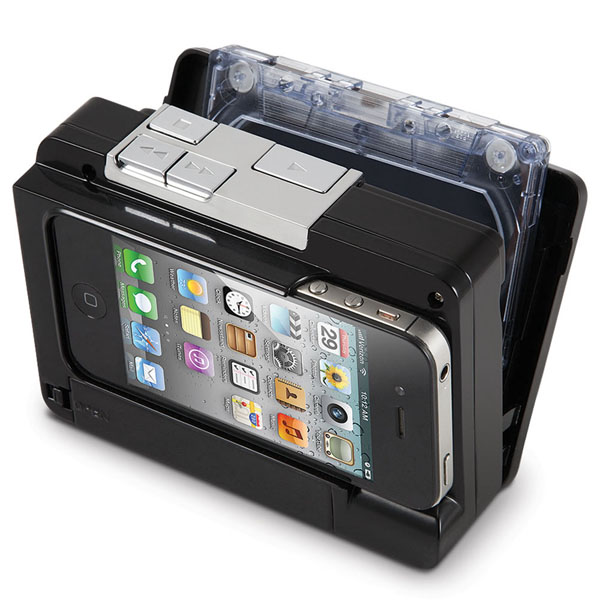 Do you still have that romantic mixtape that your boyfriend or girlfriend made for you in high school? Now you can keep the music and memories and get rid of your tape players and tapes as you convert music from cassettes to mp3’s with the Cassette to iPhone/iPod Converter.

With exposure to hoarders and pack-rats revealed on television, the footage is a wake-up call on what not to become. It’s really hard for geeks because we have an affection for material things and for collecting various objects. Luckily, we have technology and digital gadgets with plenty of memory that will store our music, books, photos and videos so that we can downsize and get rid of some useless baggage. 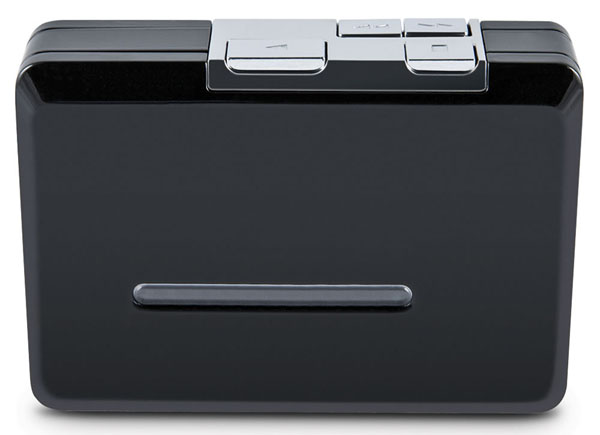 The Cassette To iPhone Converter.
This is the device that converts audio tape cassettes into MP3 files and stores them directly onto an iPhone or iPod touch. It accepts most iPhones and iPod touches, and normal or chrome cassette tapes. With its free app, conversion to MP3 is as simple as inserting a cassette, docking an iPhone or iPod touch, and pressing play. Tapes can be listened to using the headphones jack (headphones required) or by connecting its audio output to a stereo system for scanning forward or reverse to select tracks for conversion. Cassettes can also be converted to a PC running Windows 7, XP, or Vista or a Mac using the included software. Its small footprint allows easy portability for conversion anywhere at any time. Requires two AA batteries. 4 1/2″ L x 3 1/4″ W x 1 1/4″ D. (8 oz.)

Cassette tapes and CDs were the solution to the bulkier 8-tracks and records, but now albums need not be a physical entity and can simply be stored by means of an mp3 player. If you’re still holding on to your library of cassettes, it’s time to get rid of the plastic and store all that sentimental music on your iPod Touch.

The converter is about the size of the Sony Walkman, fitting nicely into the palm, and also runs off batteries. Some of the songs on your mixtapes might not make the cut anymore, which is why you can plug in your headphones and reverse/fast-forward to choose exactly what you want to save to your iPod. Just the action of reversing and fast-forwarding will make you realize how lame tapes are today and why you want to do away with them.

If you’re a vinyl pack-rat, then maybe you’d want to invest in the iLP Turntable or iPhone/iPod Turntable.

Pyle Audio has shown us some cool docking systems in the past and now they just announced the release of new additions to their turntable lineup. The new Pyle Audio Vintage Turntables are a gift that everyone can enjoy. With three models to choose from, […]

Don’t stop believing because you know you just can’t fight this feeling any longer. You want to take those hits from your 80’s cassette tapes and breathe new digital life into them. The Audio Restoring Cassette to CD Converter has what it takes to give […]

If you miss listening to music on old cassette tapes the Tape 2 GO USB Cassette Walkman is perfect for you. Now you can easily rip your audio cassettes into digital format. It’s the best of both worlds, old and new. This walkman will play […]

The cassette tape and its related products may be quite obsolete as a way to enjoy music, but their retro design will always look cool even with modern products. We have seen many examples of this before, like this USB hub, this USB drive or […]

If you have a large record collection, you might want to enjoy some of that old music on your iPad. Well now you can transfer those songs directly from your record to your tablet with the iLP Turntable. Just put your iDevice in the slot, […]

Maybe you have a lot of old cassette tapes with great music laying around, but no device where you listen to them. Here’s your chance to change this. The USB Cassette Deck ($198) lets you convert those tapes into MP3 files, giving you the chance […]

The 45 iPod Cases web site offers a wide selection of cases made from cassette tapes, built to fit your 1st and 2nd generation iPod Nano.

Looking at your DVD player and wondering how you’ll ever get it to play your huge collection of VHS tapes? Well, good luck with that, but the VHS To DVD Converter offers the next best thing by letting you record your VHS tapes onto DVD. […]