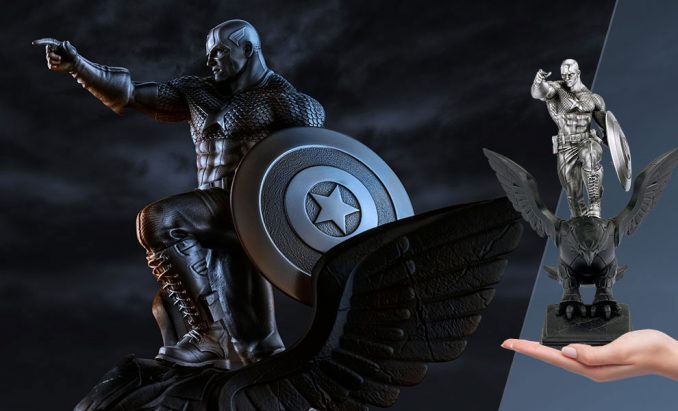 This Captain America Resolute Figurine is an amazing limited-edition collectible, especially for Captain America fans that admire him for his courage, virtue, determination, and patriotism. He has a perfectly powerful pose on top of a massive eagle that seems to say, “I can do this all day.”

With a limited-edition production of just 3,000 individually numbered pieces, this impressive pewter figurine is made by Royal Selangor and officially licensed by Marvel. Since Cap is mounted on top of the sculpted bonded porcelain eagle, the overall size ends up much larger than most typical pewter figures, standing 12.4″ tall (31.5cm) with a width of 7.2″ (18.3cm) and a depth of 9.6″ (24.4cm). It would look amazing on your desk or in a prominent position in your display case.

Steve Rogers’ stance on a superhero’s right to independence has put him at loggerheads not only with Tony Stark and SHIELD, but with world governments and the public at large. On the run with his band of renegade Avengers, Captain America knows he must take a stand.

Designed by Studio HIVE and brought to life by sculptor Mufizal Mokhtar, a superbly realised pewter Captain stands resolute on the back of a powerfully sculpted bonded porcelain eagle, that emotive American symbol of patriotism and freedom, the determination to fight for what he believes in more than apparent in his demeanour.

This Captain America Resolute Figurine is available for pre-order at Sideshow Collectibles with a price of $700.

These Captain America Suit-Up Crew Socks are probably the best yet, and we’ve seen plenty of Captain America socks: Argyle,  Athletic, Text, and even Captain America Socks With Wings. The patriotic red, white, and blue style is awesome, and they should be very comfortable since […]