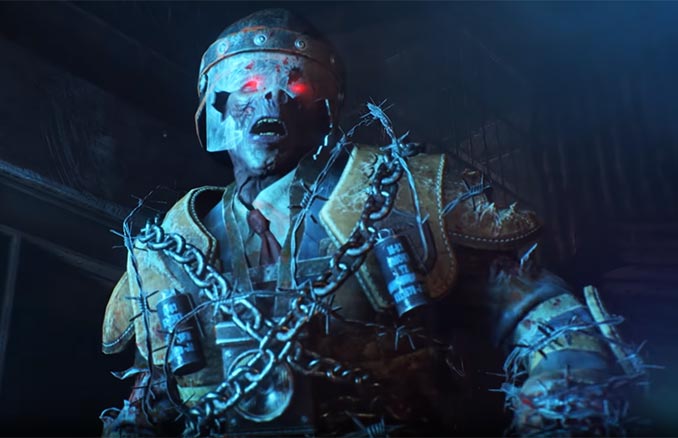 Back in the original set of Black Ops 4 Zombies Trailers there was a Blood of the Dead Teaser, and it really was just a teaser with no real action. That all changes now with the Call of Duty: Black Ops 4 Zombies – Blood of the Dead Trailer, where you can an in-depth preview of the story. It features the classic Zombies heroes (Richtofen, Dempsey, Takeo and Nikolai) beneath the Alcatraz Penitentiary in a secret laboratory facing a familiar enemy Hell-bent on imprisoning them for all eternity.

Also watch the new Chaos Story Trailer, which looks at the other two zombie experiences (IX and Voyage of Despair) that will be included in Call of Duty: Black Ops 4.

Watch the Official Call of Duty: Black Ops 4 Zombies – Blood of the Dead Trailer from Activision:

Relive the undead legacy with this reimagined fan-favorite Zombies experience.

“Blood of the Dead” takes the classic Zombies heroes — Richtofen, Dempsey, Takeo and Nikolai – on a journey to a secret laboratory beneath the iconic Alcatraz Penitentiary. Encountering a familiar enemy Hell-bent on imprisoning them for all eternity, the Primis crew quickly realize that the future predicted by the Kronorium – the future they sough to secure – is now in serious jeopardy.

Call of Duty: Black Ops 4 delivers the biggest Day 1 Zombies offering ever with three full experiences at launch: IX, Voyage of Despair, and Blood of the Dead. With an exciting new adventure and a brand-new cast of characters, Call of Duty: Black Ops 4’s Zombies will feature the deep gameplay and Easter eggs that its fans have come to expect.