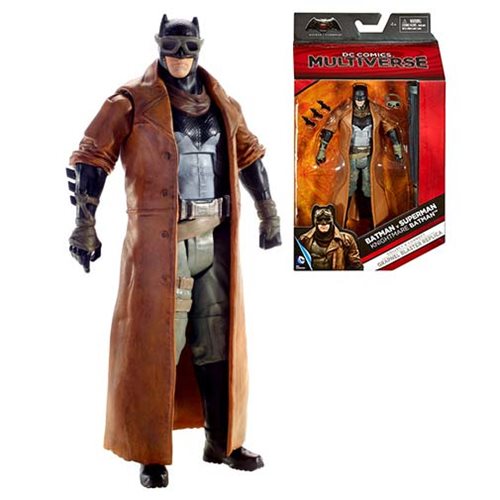 What do you call a bad dream that Batman has? A knightmare. Ha! Tough crowd. Anyway, the Batman v Superman Multiverse Knightmare Movie Masters Action Figure lets you wrap your greedy little fingers around one of the best scenes of BvS.

Whether you call him Knightmare Batman or Desert Commando Batman, the Dark Knight climbs to a new level of awesome with an outfit that consists of a duster-style jacket and goggles. The latest word on the street is that this scene isn’t actually a bad dream. Instead, it’s Batman getting a peek at a possible future… because it makes perfect sense to have a non-super-powered hero display a superpower that has absolutely nothing to do with him. Meh! What do you expect from a film that has Jesse Eisenberg miscast as Lex Luthor?

The figure stands approximately 6 1/2-inches tall and comes with a piece to build Batman’s Grapnel gun.

The Batman v Superman Multiverse Knightmare Movie Masters Action Figure will be available May 2016 but it can be pre-ordered now for $22.99 at Entertainment Earth.

We all have the occasional bad hair day, but there are also other days that qualify as total “meh” days. Instead of trying to pretend like you care, it’s easier to put on the Meh Hoodie and keep things real. Simply designed in all black with white letters […]

Nope, it’s not a bad dream. The Batman v Superman Dawn of Justice Knightmare Batman Pop! Vinyl Figure can really be yours. If you’re interested in Batman v Superman, there’s a pretty good chance you’ve seen the trailer that features a desert-equipped Batman being apprehended […]

Freaks like the Joker probably make Batman have bad dreams, especially if those dreams are filled with scenes like the one on the Dark Knightmare T-Shirt. The artists known as Harantula have created an eye-catching image that adds a little creepiness to the iconic Bat […]

The DC Comics Multiverse Batman 1966 Arkham Origins 4-Inch Action Figure looks a little tougher than the classic and campy character that inspired it. You wouldn’t think the 1966 Caped Crusader would last long in the dark, gritty world of Arkham Origins but I believe […]