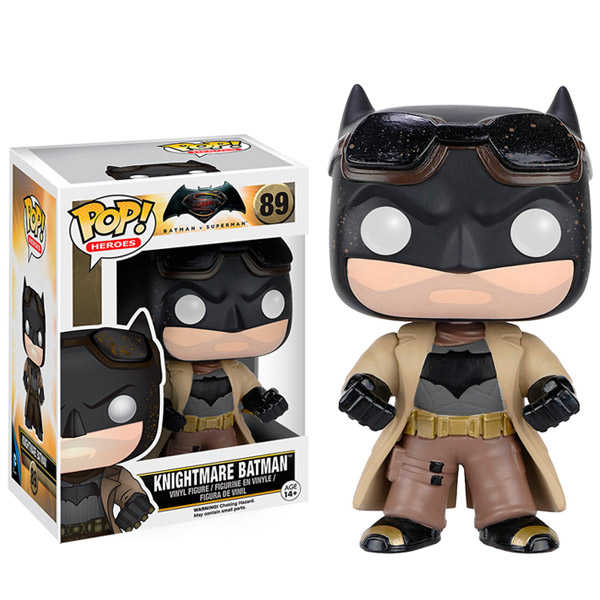 Nope, it’s not a bad dream. The Batman v Superman Dawn of Justice Knightmare Batman Pop! Vinyl Figure can really be yours.

If you’re interested in Batman v Superman, there’s a pretty good chance you’ve seen the trailer that features a desert-equipped Batman being apprehended by soldiers wearing a familiar S logo on their uniforms, and then having his cowl ripped off by a very angry-looking Man of Steel. Is it a nightmare? Is it reality? Is Bruce Wayne about to get his face melted off? We won’t know until the movie hits the big screen. Until then, let the action unfold the way you want it to with this 3 3/4-inch-tall figure.

The Batman v Superman Dawn of Justice Knightmare Batman Pop! Vinyl Figure will be available later this month but it can be pre-ordered now for $9.99 at Entertainment Earth.

What do you call a bad dream that Batman has? A knightmare. Ha! Tough crowd. Anyway, the Batman v Superman Multiverse Knightmare Movie Masters Action Figure lets you wrap your greedy little fingers around one of the best scenes of BvS. Whether you call him […]

Freaks like the Joker probably make Batman have bad dreams, especially if those dreams are filled with scenes like the one on the Dark Knightmare T-Shirt. The artists known as Harantula have created an eye-catching image that adds a little creepiness to the iconic Bat […]

The Batman v Superman: Dawn of Justice Batman Pop! Vinyl Figure is ready to make the Man of Steel bleed because nobody – and I do mean nobody – tells the Bat to ignore the Bat Signal. Based on Ben Affleck’s portrayal of Batman in […]