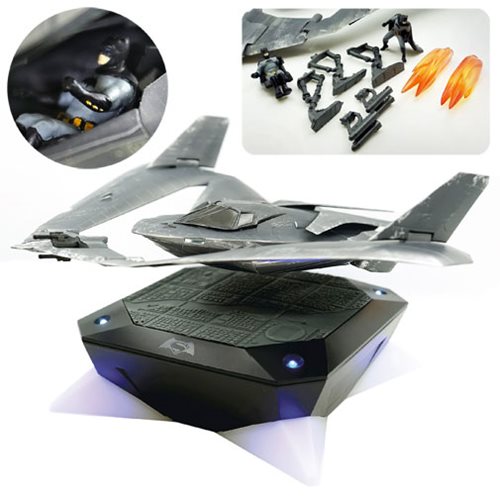 Your name doesn’t have to be Martha in order for you to enjoy the Batman v Superman: Dawn of Justice Batwing 1:30 Magnetic Levitation Version, but that interesting little coincidence might be enough to keep the Dark Knight from impaling you with a Kryptonite-tipped spear.

Inspired by the Batwing in Batman v Superman, this levitating model features 4 LED lights in the front, 2 on the wings, and 2 at the rear, built-in motion sensors that let you control the Batwing’s transformations from flying, landing, and combat modes with simple hand movements, and a diorama base that features a birds-eye view of Gotham City. Accessories include 2 Batman figures (1 standing, 1 sitting), machine guns, landing gear, missiles, power adaptor, and instruction booklet.

The Batman v Superman: Dawn of Justice Batwing 1:30 Magnetic Levitation Version will be available January 2018 but it can be pre-ordered now for $599.99 at Entertainment Earth.

It’s time to fly high like a bat in the sky with the Batman: The Animated Series Batwing Vehicle. The Batmobile is a sweet ride but sometimes Batman needs to get above the grit and grime of the mean streets of Gotham City, which is […]

The 1989 Batman movie brought Batman in the mainstream again and he has never left. Celebrate Batman and his amazing vehicles by carrying this 1989 Batwing Keychain. It was created using digital files from Warner Bros. You may not own a Batwing, but at least […]

Prepare yourself, young Padawan, because the Star Wars Levitation Lightsaber Limited Edition Fountain Pens will test your love for Star Wars. Is the Force strong with you? Oh my! Where to begin? First, we have classy fountain pens designed to look like the lightsabers of […]

Do you bleed? Well, don’t do it while you’re wearing the Batman v Superman: Dawn of Justice Superman Grand Heritage Costume because red and blue don’t look good together. Oh wait. Yes, it does. So you’re not from Krypton. You’re not more powerful than a […]

The Dark Knight versus the Man of Steel but you don’t have to choose sides with the DC Comics Batman V Superman: Dawn Of Justice Teaser T-Shirt, and that’s a good thing because we all know Batman will win… or maybe Superman… or maybe neither. […]