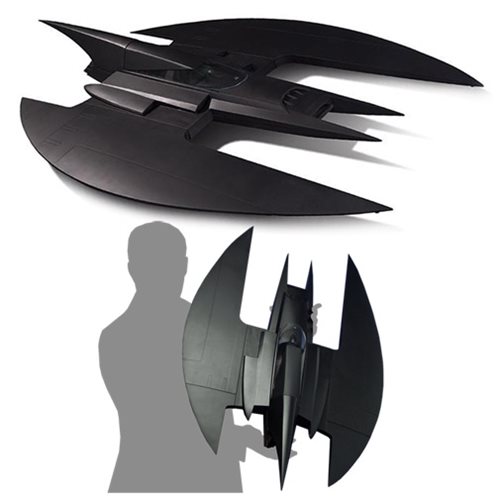 It’s time to fly high like a bat in the sky with the Batman: The Animated Series Batwing Vehicle.

The Batmobile is a sweet ride but sometimes Batman needs to get above the grit and grime of the mean streets of Gotham City, which is when he turns to the awesome Batwing.

Measuring 36-inches-long, the Batwing can hold 2 DC Collectibles Batman: The Animated Series action figures so send Batman after the bad guys with Robin or Catwoman (or maybe even Harley Quinn) providing back-up.

The Batman: The Animated Series Batwing Vehicle will be available November 2016 but it can be pre-ordered now for $144.99 at Entertainment Earth.

This is Batman’s Batwing as you have never seen it before. This Batman 1989 Batwing Metal Vehicle Statue is an awesome replica. Have you ever seen a Batman vehicle so sleek and metallic? It is a 6-inch wide miniature replica that is made of metal. […]

Your name doesn’t have to be Martha in order for you to enjoy the Batman v Superman: Dawn of Justice Batwing 1:30 Magnetic Levitation Version, but that interesting little coincidence might be enough to keep the Dark Knight from impaling you with a Kryptonite-tipped spear. […]

The 1989 Batman movie brought Batman in the mainstream again and he has never left. Celebrate Batman and his amazing vehicles by carrying this 1989 Batwing Keychain. It was created using digital files from Warner Bros. You may not own a Batwing, but at least […]

Fasten your seatbelts, Bat-fans, because the Batman: The Animated Series Batmobile Vehicle with Lights is ready to race into your collection of Bat-goodies. Based on the iconic design of Batman’s ride in The Animated Series, the Batmobile measures approximately 24-inches-long, and features light-up head lights, […]