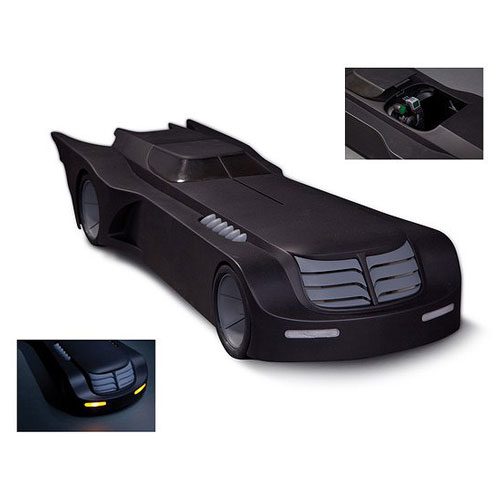 Fasten your seatbelts, Bat-fans, because the Batman: The Animated Series Batmobile Vehicle with Lights is ready to race into your collection of Bat-goodies.

Based on the iconic design of Batman’s ride in The Animated Series, the Batmobile measures approximately 24-inches-long, and features light-up head lights, brakes, and engine. It also has independently-moving wheels and fits two Animated Series action figures (sold separately).

The Batman: The Animated Series Batmobile Vehicle with Lights will be available October 2015 but it can be pre-ordered now for $84.99 at Entertainment Earth.

This Batman Beyond Animated Series Batmobile Vehicle with Collector Magazine is a must buy for serious Batman fans. This version of the Batmobile is going to look great in your collection. The Batman Automobilia Collection is a bi-weekly series featuring the most iconic vehicles to […]

The Batman Arkham Knight Batmobile 1:18 Scale Hot Wheels Elite Cult Classics Die-Cast Vehicle is ready to cruise into your collection of Bat goodies. Based on the Batmobile that appears in the Arkham Knight video game, this sweet ride measures approximately 13-inches long x 6 […]

Batman fans get a double feature with this Batman Forever 1995 Batmobile Die-Cast Vehicle with Magazine. You are not only getting an awesome Batmobile toy, but also some geeky reading material. The Batmobile comes with a unique 3-D lenticular backdrop that creates a detailed scene. […]

It’s time to fly high like a bat in the sky with the Batman: The Animated Series Batwing Vehicle. The Batmobile is a sweet ride but sometimes Batman needs to get above the grit and grime of the mean streets of Gotham City, which is […]