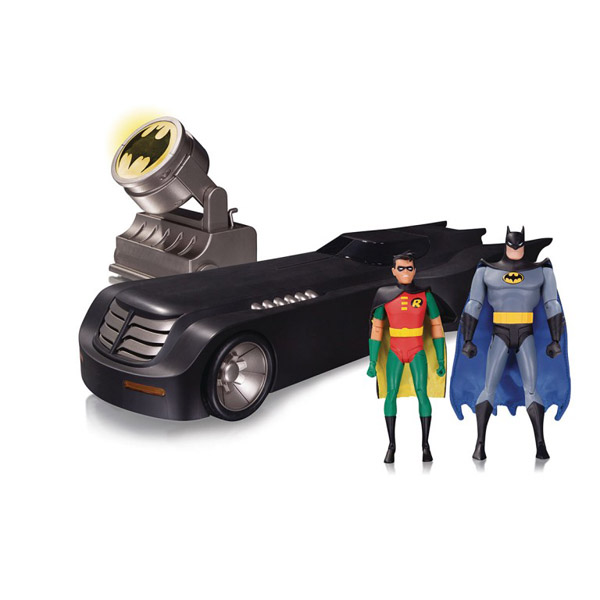 The Caped Crusaders are ready to defend Gotham City with the Batman: The Animated Series Deluxe Batmobile with Lights, and they can even be called by flashing the bat signal up in the sky.

The Batmobile in Batman: The Animated Series is one of the coolest rides around, and now it can be yours with this 24-inch long replica that includes light-up headlights, brakes, and engine, as well as independently-moving wheels.

Of course, the Batmobile can’t fight crime by itself, which is why 6-inch-tall figures of Batman and Robin are included. You even get a 6 1/2-inch tall light-up bat signal to summon the Dark Knight and Boy Wonder.

The Batman: The Animated Series Deluxe Batmobile with Lights will be available October 2016 but it can be pre-ordered now for $139.99 at Entertainment Earth.

Fasten your seatbelts, Bat-fans, because the Batman: The Animated Series Batmobile Vehicle with Lights is ready to race into your collection of Bat-goodies. Based on the iconic design of Batman’s ride in The Animated Series, the Batmobile measures approximately 24-inches-long, and features light-up head lights, […]

The Animated Series Batman and Robin Figures with Bat-Signal

These Batman: The Animated Series Batman and Robin Figures with Bat-Signal are all you need to have adventures with the animated version of the duo. The Caped Crusader and the Boy Wonder are ready for action. They come with a battery-powered Bat-Signal! Batman stands about […]