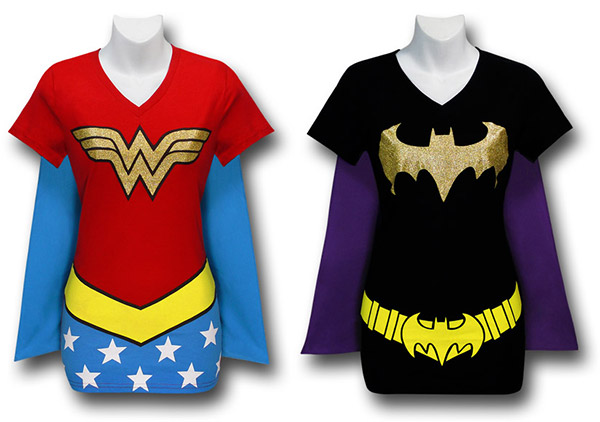 Remember those awesome Junior’s Caped Costume T-Shirts from last year? (There were also versions for Guys and Kids.) Well now they have brand new Juniors V-Neck Caped Costume T-Shirts, and they’re even better than the last ones. There are versions for Wonder Woman, Supergirl, Batgirl, and Robin, which are the same characters available last time, but these are nicer and sexier. Quite simply a v-neck looks a lot nicer on girls than crew neck, and these also have better graphic designs and much more vibrant colors. 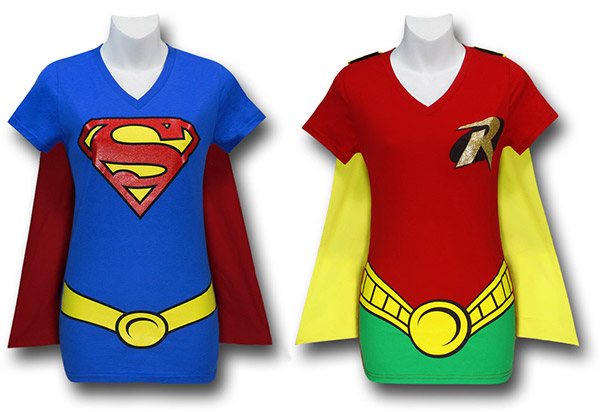 This 100% cotton, red v-neck junior’s t-shirt in the style of Wonder Woman’s costume features a large, sparkly gold Wonder Woman symbol across the front, and the yellow print of her belt dipping down just above her (also-printed) star-spangled blue….bloomers? Boyshorts? Wonderpants? Let’s go with that. Attached by two velcro tabs to the back is a lovely blue cape, emblazoned with the yellow outline of the old ‘WW’.

This bright blue junior’s v-neck shirt is made from 100% cotton and is in the style of the costume of none other than Supergirl herself! On the front there’s the large ‘S’ symbol we all know and love, here with the ‘S’ and its outline in Super-sparkly red over the traditional yellow background. Printed low across the hips is her yellow belt, and on the back? A lovely red cape, attached to either shoulder by Velcro tabs! The cape itself is also emblazoned with the symbol of everyone’s favorite refugee from Argo City, printed here in bright yellow.

This black junior’s v-neck costume t-shirt is made from 100% cotton and features a nice big sparkly gold bat symbol across the chest. There’s also a startlingly non-utilitarian utility belt that looks cool anyway in a bold yellow print across the waist in front. But wait, THERE’S MORE! Attached to the back of the shirt by two trusty velcro tabs is a purple cloth cape bearing a less shiny, but more classic black-and-yellow bat symbol.

Here’s a bold red, 100% cotton junior’s v-neck t-shirt that’s made in the style of the Batman’s trusty, youthful (sometimes more than others) ward, Robin. The striking large ‘R’ symbol is all eye-catching gold sparkles, and slung low across the hips are a printed yellow belt and a peek at a portion of Robin’s tighty-greenies. Attached to the back by two velcro tabs as trusty as the Boy Wonder is a bright yellow cape bearing an even larger, though non-sparkly, ‘R’. 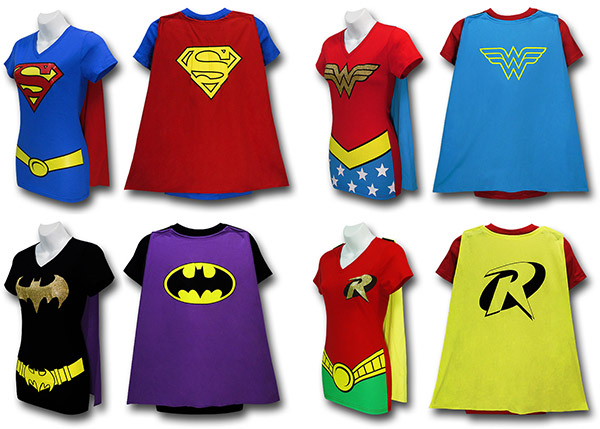 Juniors Superhero Caped Costume T-Shirts are available for $25.99 each at SuperHeroStuff.com. They are 100% cotton and available in juniors small, medium, large, and extra-large. Choose from Supergirl, Wonder Woman, Batgirl, and Robin styles.

Remember, there is a SuperHeroStuff Coupon Code to save 13% off that is good until July 6, 2012. Use it to save on these Juniors V-Neck Caped Costume T-Shirts.

If you think of yourself as more a boy wonder than a caped crusader, these Robin Costume Caped Boxers are perfect for you. We can’t all be the headlining act after all. Anyway, Batman knows that he would be nothing without Robin. It’s called teamwork. […]