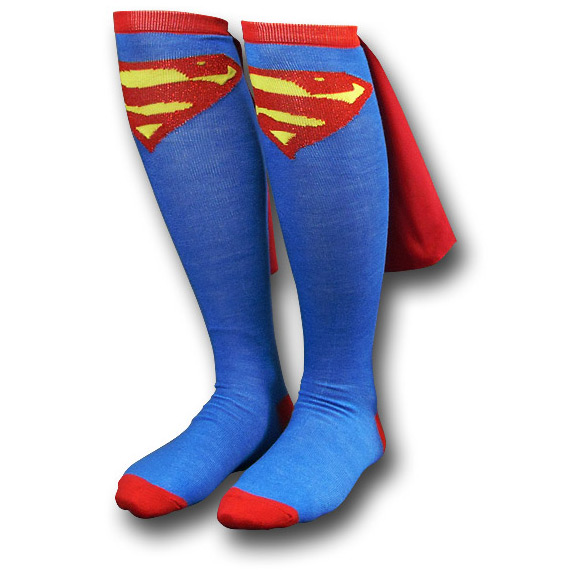 A couple months ago we posted about Superhero Socks with Capes. Most popular were the Superman Cape Socks, but there were also versions for Wonder Woman, Batman, and Robin. Today there is renewed interest in the Superman socks with capes because Robert Griffin III was sporting a pair of these babies during the 2011 Heisman Trophy Presentation. Geek stuff is now cool, as we already knew here at GeekAlerts.com.

The problem is these Batman, Robin, Wonder Woman, and Superman cape socks sold out right away back in October. They were really popular even before a star athlete wore them in front of millions of TV viewers, and now everyone wants them. Hopefully more will be available soon, but for now you can try your luck at finding them at eBay or Amazon.com. 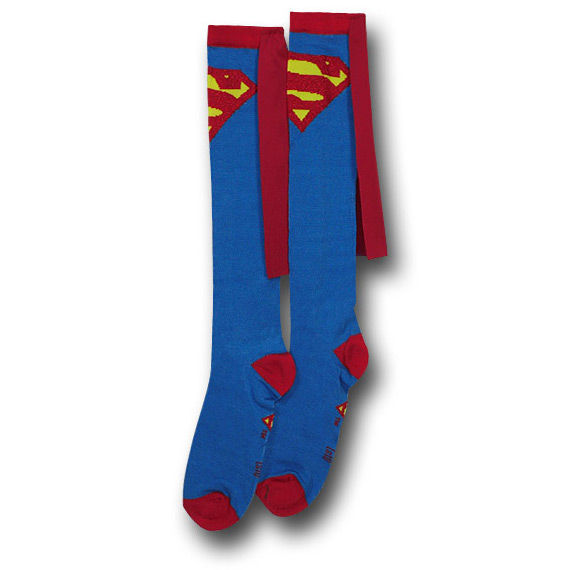 Given the spike in interest in these Superman socks with capes, they are going to be almost impossible to find unless there is another production run. Since they were so popular even before Robert Griffin III wore them to accept his Heisman Trophy, it just makes sense that more will be made. However, it is doubtful we’ll see more Superman Cape Socks in time for Christmas.

Fortunately you have some options, but first Follow GeekAlerts in Facebook, Twitter, or by Email so that you don’t miss out next time. We would have alerted you to these Superman cape socks back in October, when you could have easily bought a pair. They are sold out now, so your option is to buy Superhero Costume T-Shirts with Capes, which are also available for Women and Kids. Your other option is to browse Geek Alerts, where we have tons of other cool geeky stuff.

Thor is one of the coolest Marvel superheroes and these Thor Crew Socks With Capes are about the coolest Thor socks you will ever see. Are your feet even worthy of them? If so, each foot will wield the power of the mighty Thor. They […]

These Robin Socks w/Capes Women’s Knee-Highs will help you to look like Batman’s sidekick. These red, yellow and green knee-high socks look just like the costume worn by Batman’s ward, Robin the Boy Wonder! They feature the Robin symbol, chest-ties and utility belt, all with […]

There are socks and then there are super socks. These Superman Boot Socks are pretty super. They also go great with the Superman cape socks we featured a while back. The big blue boy scout would approve. They feature a below the knee fit and […]