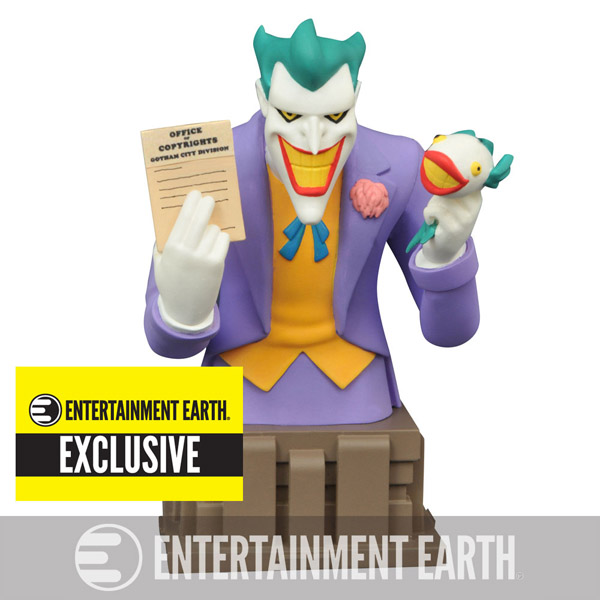 Leave it to the Joker to be unique. Other busts in the Batman: TAS series, including Batman, Catwoman, and Poison Ivy, capture the iconic characters in basic poses that don’t really indicate specific shows, but this Clown Prince of Crime comes straight from the Batman: The Animated Series episode, The Laughing Fish.

Standing 6-inches tall and limited to just 1000 pieces, the mini-bust shows the Joker wielding a Jokerfish and copyright paperwork as he attempts to make money (sort of) legally… if you don’t count the numerous attempts on people’s lives.

The Batman: The Animated Series Laughing Fish Joker Bust will be available February 2016 but it can be pre-ordered now for $54.99 at Entertainment Earth.

Save your money in this Batman The Animated Series Joker Bust Bank. You’ll save money and saving money is no joke. It’s a great way to get funds for more Batman merchandise. Plus this Joker looks great on display as it is hoarding your money. […]

Now you can celebrate the animated Batman with this Batman Animated Series Batman Bust. This bust is based on the iconic Batman: The Animated Series. This 6-inch resin bust depict Batman with his arms are crossed and his cape flowing, atop an art-deco base inspired […]