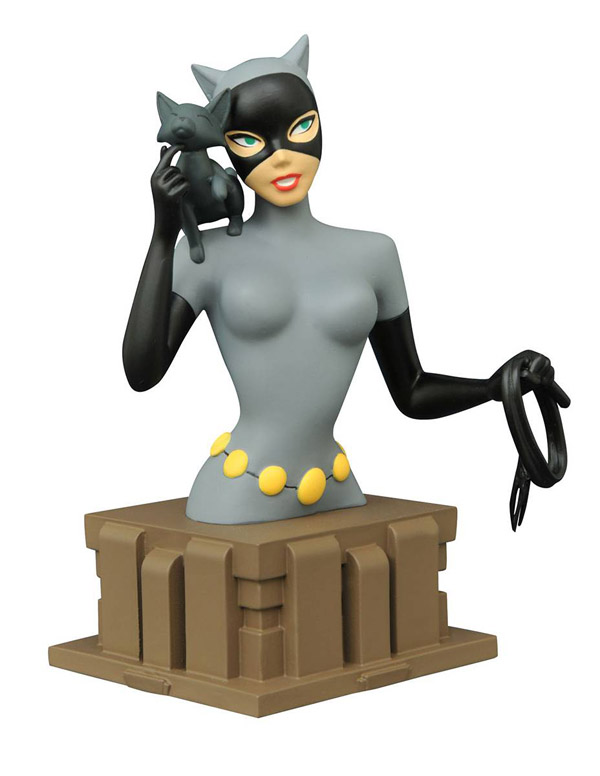 The cat crushing on the bat poses with a feline friend on the Batman: The Animated Series Catwoman Bust.

Standing 6-inches tall, Catwoman gets animated with a waist-high bust that features her in her iconic TAS costume, complete with whip and kitty. The art deco base is similar to other busts in the collection, which include Batman and Poison Ivy.

With a certificate of authenticity included, the Catwoman bust is limited to just 3,000 pieces.

The Batman: The Animated Series Catwoman Bust will be available February 2016 but it can be pre-ordered now for $54.99 at Entertainment Earth.

The Dark Knight finds himself in an interesting position on the DC Comics Batman Poison Ivy Catwoman T-Shirt. I wonder if Catwoman will help him scratch the itch that Poison Ivy will give him. The Hush storyline is considered one of the best Batman stories […]

Now you can celebrate the animated Batman with this Batman Animated Series Batman Bust. This bust is based on the iconic Batman: The Animated Series. This 6-inch resin bust depict Batman with his arms are crossed and his cape flowing, atop an art-deco base inspired […]