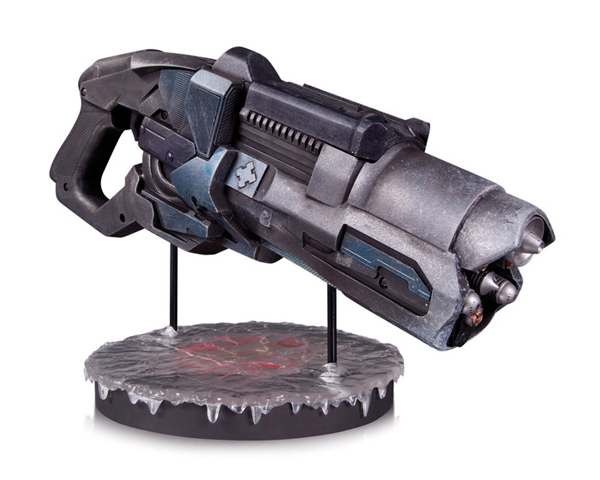 Things are about to get a lot cooler around here with The Flash TV Series Captain Cold Freeze Gun Prop Replica.

You would think that it would be hard to be cool with a name like Leonard Snart, but the man known as Captain Cold has found a shortcut to coolness by getting his hands on the freeze gun created by Cisco Ramon, and now you can wrap your hands around it, too.

Measuring about 18-inches long x 8-inches tall x 3-inches wide, this prop replica features an ice-covered stand and lighting effects. As far as actually working goes, it works as well as Captain Cold’s actual freeze gun… after it has exchanged energy blasts with Heatwave’s heat gun, that is.

The Flash TV Series Captain Cold Freeze Gun Prop Replica will be available June 2016 but it can be pre-ordered now for $249.99 at Entertainment Earth.

James Bond fans will instantly recognize the image above as the gun from the classic 007 movie “The Man With The Golden Gun”. Now you can be the man with the golden gun thanks to this James Bond Golden Gun Limited Edition Prop Replica. The […]

You might not have any super-soldier serum to boost your strength but you can still become the patriotic Avenger with the Captain America Prop Replica Shield, which was cast with the same molds used for the prop seen in The Avengers. In the comic books, […]

Moonraker is one of the more Sci-Fi James Bond movies. And this James Bond Moonraker Laser Gun Replica can be had by you to always remember the film. It is made of high-quality polyresin and is a limited edition of just 500 pieces. As far […]

The Borderlands 2 Infinity Gun Full Scale Prop Replica comes straight out of the hit Borderlands 2 video game and into your home. This amazingly detailed prop replica of the Infinity gun is a limited edition of just 500 pieces! This is the most authentic […]