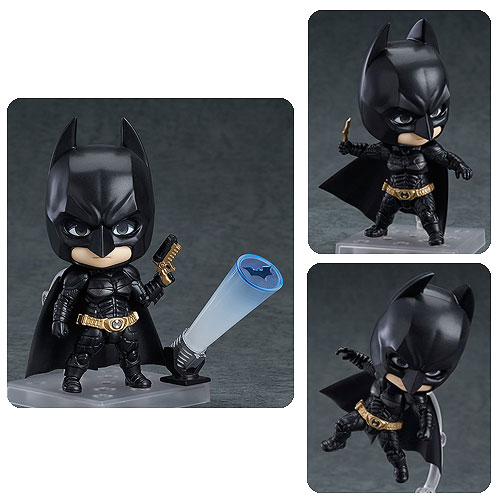 This Batman The Dark Knight Nendoroid Action Figure is the cutest Batman ever. He may be adorable, but he looks just as impressive as ever, even in Nendoroid form.

The Batman Dark Knight Rises Nendoroid Action Figure stands 4-inches tall and features Batman in his Dark Knight outfit. He comes with a cool Bat-signal projecting the Batman logo and his grappling gun. Criminals should not be fooled by his size or cuteness. This little guy means business.

Only $45.99 from Entertainment Earth. Pre-order him now and he will ship in February.

The Mega Man Battle Network Nendoroid Action Figure is from the popular game celebrating its 15th anniversary. It is a fully articulated Nendoroid of the NetNavi used by main character Lan Hikari. It’s MegaMan.EXE! He comes with both a smiling expression and a combat expression […]

Legend of Zelda fans are going to love The Legend of Zelda: Majora’s Mask Link Nendoroid Action Figure. It’s Link, but in super adorable form. This figure features the time-travelling hero of Hyrule in Nendoroid form. Link even comes with his fairy friend, Tatl, his […]