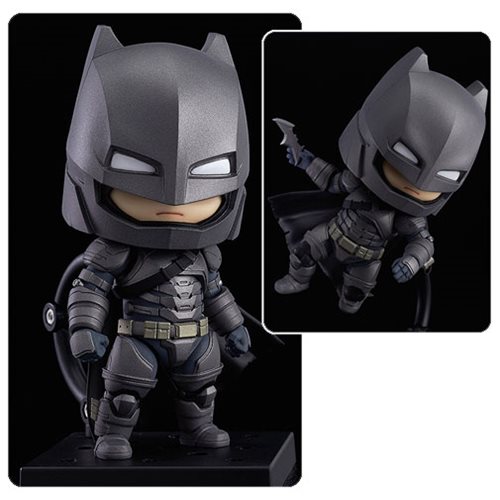 You can pose him anyway you want. This figure shows the cuter side of the Dark Knight. He stands about 3 9/10-inches tall, but his cuteness makes him seem large and imposing. This is a great gift for any Batman fan, including yourself.

The Batman v Superman: Dawn of Justice Armor Batman 10-Inch Plush Figure is the perfect gift for any Batman fan! This guy is going to look great displayed in your home. Plus you can play with him, cuddle up to him in your bat-cave with […]

The Dark Knight gets ready to let justice dawn on the Man of Steel’s face with the Batman v Superman: Dawn of Justice Batman MAF Action Figure. Does Superman bleed? It looks like Batman is ready to find out the answer to that question with […]

The Dark Knight rises, ready to stomp the Man of Steel into the ground as the Batman v Superman: Dawn of Justice Batman Play Arts Kai Action Figure. Based on Ben Affleck’s Batman, this highly-detailed figure stands approximately 10-inches tall and features the over-sized Bat […]