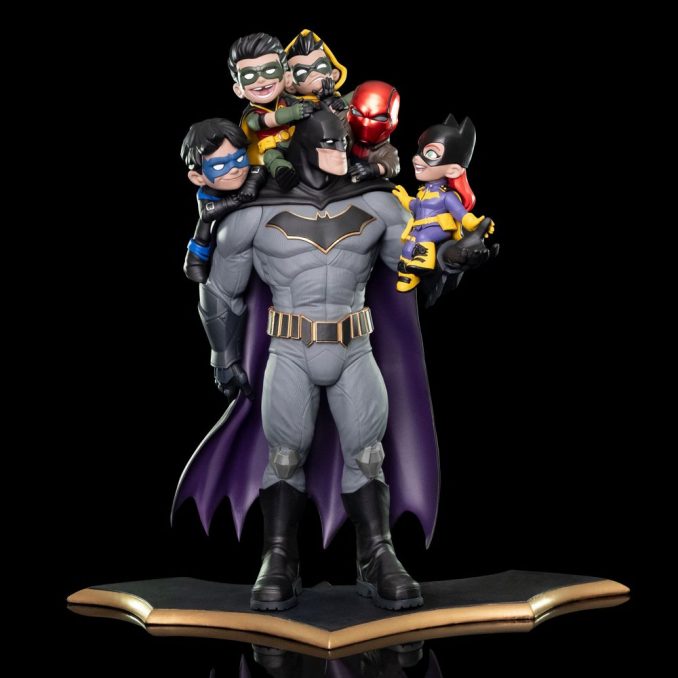 Packed with details, this amazing 3D sculpture stands over 15″ tall. In fact, it is the biggest and most detailed figural diorama Quantum Mechanix has ever made. It was created by QMx Creative Director Mohammad Haque and is titled “Family.”

Batman, the ultimate loner, is paradoxically all about family. You can see it in everything he does, everything he is. The death of his family made him. He fights to make sure no one else ever has to suffer the loss of loved ones like he did. And despite his protests to the contrary, he is forever building family around him.

That’s what QMx Creative Director Mohammad Haque endeavored to capture in this figure, titled simply “Family”. He wanted to explore this little discussed, but key aspect of the Batman character: That of family man. The result is the biggest, most detailed figural diorama QMx has ever made, the first in a new series of large format dioramas called “Q-Master.” Family stands over 15 inches tall and has six different characters included in the diorama. It encompasses the entire history of Batman’s relationships in crime fighting, including all his various proteges. Each sidekick is represented in this piece, with their positioning and expressions reflecting their personalities and relationships with Batman:

This Batman Family Q-Master Diorama Statue is $199.99 at Entertainment Earth. It is available for pre-orders, with shipping expected in August 2019. Order yours before they’re gone.

Batman’s colorful sidekick enters the Batcave with the Robin Maquette Diorama, proving that short shorts and bright colors are the perfect clothes to wear when you want to wander around a dangerous city at night. Poor Burt Ward. Adam West got the cool(ish) Batman outfit […]

Dick Grayson might be all grown-up but the Dynamic Duo is together again on the Nightwing Dynamic Duo T-Shirt. Once upon a time ago, Bruce Wayne took on a young ward and trained him to be Batman’s brightly-colored sidekick, Robin. That first sidekick has grown […]

Batman would be proud of his young student on the Nightwing Bludhaven T-Shirt. A masked vigilante stands on a creepy gargoyle, glaring down at the bad guys he’s getting ready to pummel as bats fly all around him. It’s a familiar image to comic book […]