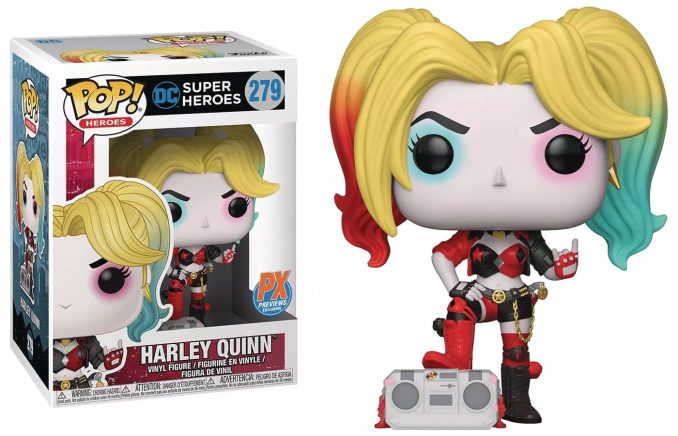 There have been plenty of Harley Quinn figures before, but this Previews Exclusive Funko Pop! DC Heroes Harley Quinn with Boombox is quite unique. Its design is based on Carlos D’Anda variant cover of the DC Universe Rebirth Harley Quinn #1, but with that added stylistic flair Funko is known for. It is Funko Pop! DC Super Heroes #279.

The Maid of Mischief, Miss Harley Quinn is no longer just a mere villainous sidekick and love interest, but truly a woman holding her own on the mean streets of Gotham! Based on the Carlos D’Anda variant cover of the DC Universe Rebirth Harley Quinn #1, this stylized Harley is full of Funko flair! Standing about 3 3/4-inches tall, this Previews Exclusive Harley Quinn Pop! vinyl figure comes in a collector-friendly window box for easy display!

Funk Pop! Harley Quinn with Boombox is $12.99 at Entertainment Earth. It is available for pre-orders, with shipping expected in June 2019.

The 80’s are gone but I know I can’t be the only one that would like to see the iconic boombox make a comeback, right? The Berlin Boombox lets you rock it old-school by combining modern technology, cardboard, and 80’s stylishness. iPhones and iPods are […]

Sure the ghetto blaster revolution of the 80s was all about style and the boombox was the only true way to blast tunes to break dance to, but boomboxes were heavy and didn’t double as soft pillows. With the Boombox Speaker and Cushion of today, you can have the look and […]

Are you having dreams about those cool old boomboxes, but nightmares about the back pain that came with the coolness of carrying them around? Work around it with one of these boombox bags:

The Pop! Heroes The Joker (Beach) & Harley Quinn Vinyl Figure Set is ready for a tropical wedding. Will the Clown Prince of Crime and his goddess live crappily ever after? Based on the cover of Harley Quinn: Futures End #1, created by illustrator Amanda […]