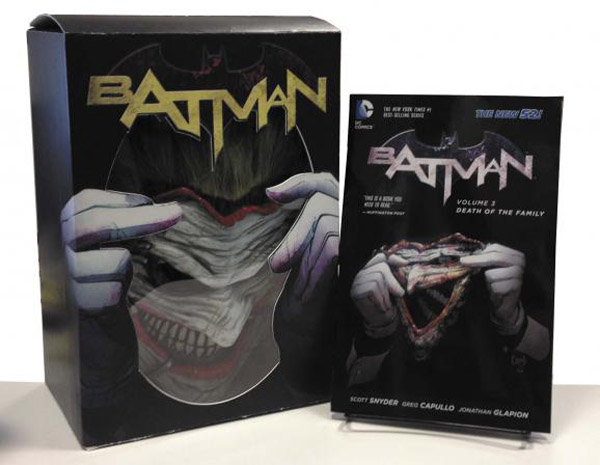 Good news! With the Batman Death Of The Family Book & Joker Mask Set, you can look just as sick and twisted as Gotham City’s Clown Prince of Crime while reading (or re-reading) this memorable Batman adventure.

This new collector’s set brings together the critically acclaimed Death of the Family story arc that was originally ran in #13 – #17 in the Batman comic book series, featuring the return of the Joker after a year-long absence.

The New 52 reboot of DC Comics did a heck of a job with making the Joker even more terrifying than before by having him make the drastic move of having his face cut off in order to escape Arkham Asylum. Upon his return, he promptly stole his face from the Gotham police department and used it as a mask… and you can do the same thing.

Fortunately, you don’t have to remove anybody’s face or steal anything from the police because this set includes a hand-painted vinyl latex mask of The Joker that features sewn-on green hair and a white elastic band.

If you want to get a little batty with your book storage, the Batman Arkham Asylum Book Shelves will make sure you always think of the Dark Knight whenever you reach for a book to read… which is undoubtedly one of the latest Batman graphic […]