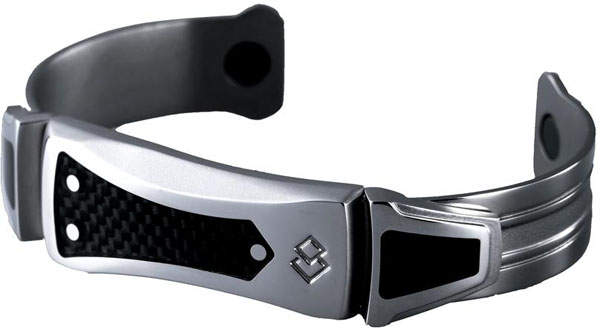 When it comes to elegance and style, you know you can trust billionaire/hero Tony Stark, and the Avengers Magtitan Neo Legend Bracelet lets you follow in the heavy footsteps of Iron Man himself.

I don’t really know what benefit the bracelets provide, but they look fine as hell and Robert Downey Jr.’s Tony Stark slips them on while confronting Loki in “The Avengers” so they must be packed with all kinds of awesomsauce.

The bracelet, made of pure titanium and stainless steel, uses Alternating North-South Polarity Orientation (ANSPO) technology and is being produced by Colantotte as a limited edition tie-in to Marvel’s “The Avengers.” While I don’t plan on going up against any Norse gods in the near future, I still wouldn’t mind having one of these on my wrist.

You can get the limited edition Avengers Magtitan Neo Legend Bracelet from Colantotte for prices from $189.99 to $199.99 and at Forbidden Planet for £149.99.

You know what time it is. Time you got a good watch. This Avengers Age of Ultron Avengers Logo Gunmetal Bracelet Watch is stylish and geeky. A great tribute to Marvel’s superhero team. It is based on Marvels Avengers: Age of Ultron and feature’s the […]