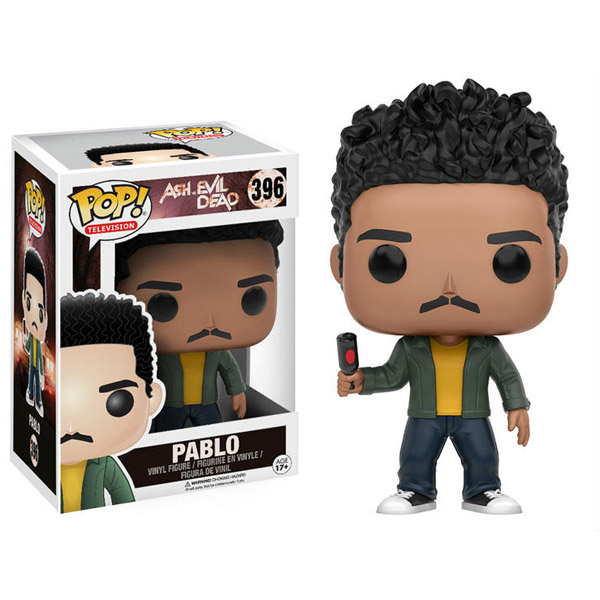 Monster slayers tend to use cool weapons, like a chainsaw in place of an amputated hand, for example. The Ash vs Evil Dead Pablo Pop! Vinyl Figure does not get a cool weapon.

Deadites walk the Earth, feasting on the souls of the innocent. Standing against this tide of evil is Pablo Simon Bolivar, armed with… a beer bottle.

Okay, a beer bottle might not be the best weapon to use when fighting the forces of Darkness. Like Pablo says in Season 1, Episode 1, Ash had to stab a Deadite like 50 times before the bottle finally worked. Fortunately, Pablo’s pal, Ash, has that cool chainsaw hand that was mentioned earlier.

Just stay close to Ash, Pablo. Maybe one of these days you’ll be lucky enough to have your hand get possessed so you have to chop it off and replace it with a chainsaw.

Standing 3 3/4-inches tall, Pablo is armed with his trusty beer bottle and some truly epic hair.

The Ash vs Evil Dead Pablo Pop! Vinyl Figure will be available November 2016 but it can be pre-ordered now for $10.99 at Entertainment Earth.