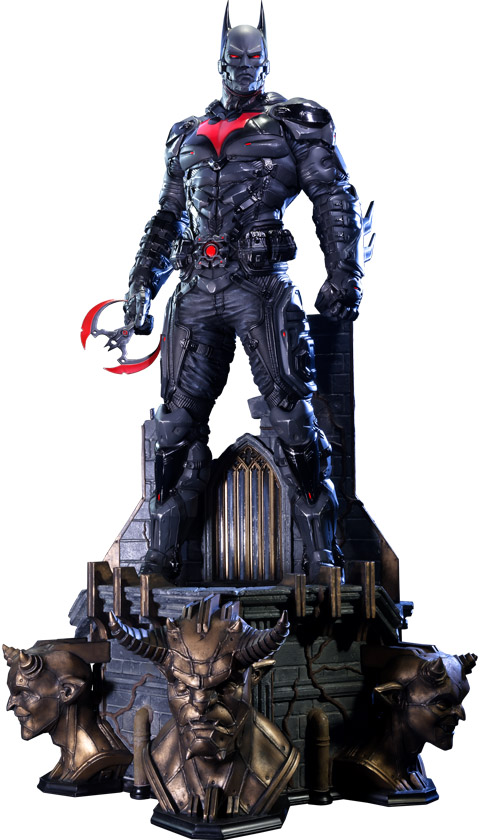 The Dark Knight of the future enters a video game of today, resulting in the Arkham Knight Batman Beyond Statue.

In the comics and animated TV series, Bruce Wayne retires from crime-fighting and eventually begins training Terry McGinnis as the Dark Knight of the future, complete with sleek new Bat costume.

Inspired by that storyline, a not-so-sleek version of Terry’s Bat suit is now included in Arkham Knight, and this 33.03-inch-tall statue captures that look perfectly, and it comes with cool goodies like a switchable mouth armor portrait and a switchable palm for holding a Batarang.

The Arkham Knight Batman Beyond Statue will be available Sep 2016 – Nov 2016 but it can be pre-ordered now for $949.99 at Sideshow Collectibles.

Harleen Quinzel wasn’t exactly playing with a full deck to begin with but the Arkham Knight Harley Quinn Polystone Statue reveals the queen of chaos during a time when she showed how twisted she could really be. Standing 29-inches tall and dressed in her Arkham […]

Bruce Wayne comes out of retirement with The Dark Knight Returns Batman Statue… and he’s way too happy about it. When the Caped Crusader hung up his cape and cowl, Gotham City became even grimmer and darker. Eventually, there was no choice but for the […]