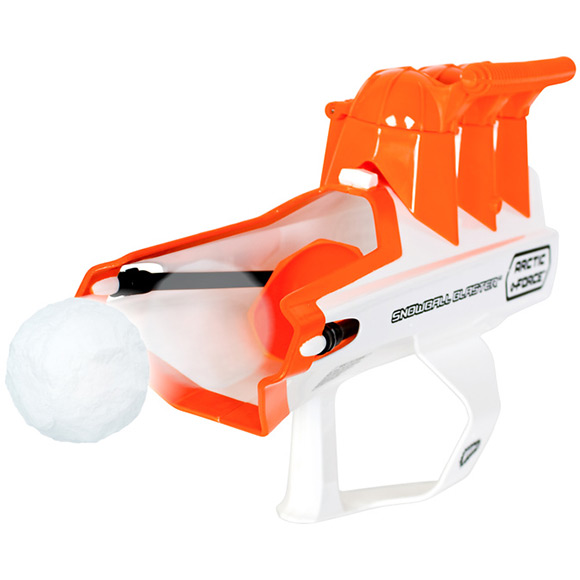 Who says you have to play fair during snowball fights? God might have given your opponents larger and quicker hands to form snowballs, but you stand a good chance at winning the battle if you’ve got the Arctic Force Snowball Blaster on your side. Just scoop up some snow into the snowball press, which helps you form three snowballs in an instant, ready for firing at the opposing team.

If you live somewhere where snow doesn’t fall, don’t fret. You can still have some rowdy battles indoors with the Bubble Blaster Gumball Filled Squirt Gun (I’d definitely want to get blasted by this), the Zing Air Benda Blaster (get ready for some foam action!), and with the Star Wars Clone Wars Blasters.

Sliding onto your arm like a long-lost (little) friend, say ‘hey-lo’ to the Arctic Force Snowball Blaster. Not only does it look like part of Robocop’s winter wardrobe, this tough and lightweight launcher is able to make three snowballs at once. But best of all, it’s capable of launching them up to 80ft! Acting like a high-powered slingshot, a scoop-shaped cup will hold the snowball in place as you pull back the rubber straps. Young guns will probably manage to fire the fluffy nuggets around 50ft, but in the hands of mum and dad they’ll reach as far as 80ft. Perfect for pelting your opponents’ defenses, lobbing over the house, or firing pot shots into next door’s garden.

The Arctic Force Snowball Blaster is available from Firebox for £24.99 ($39.)

Snow forts are awesome. I used to build some really cool igloos in winter and it was a lot of fun. So I know that your kids will love this Aviva Sports Arctic Bunker. This inflatable snow fort is made of tough cold crack resistant […]