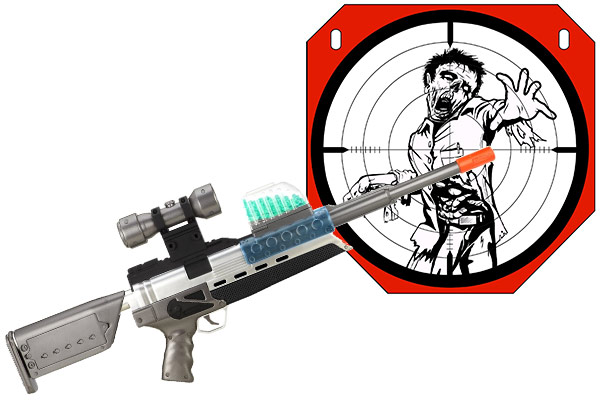 Who has the time to go to the shooting range each day or the money for ammo? Yet constant practice is the only way to be prepared for a zombie invasion. You need the E5000 Auto Fire Blaster With Zombie Target, a gun that is safe enough to use at home. This powerful and accurate blaster fires a new kind of 8mm hydro ammo that disintegrates on impact. (This BlasterPro ammunition technology is safe for backyard use, doesn’t break windows, or stain furniture.) The included zombie target is hydro chromatic, turning blood red when hit with these rounds.

Shooting over 75 feet at a velocity of 150 feet per second, the E5000 Auto Fire Blaster is a powerful and accurate shooter. It uses an electric powered, stored-energy, trigger-activated mechanism for fast and accurate firing. With a 175 round magazine and the ability to fire 150 shots per minute, this weapon is as effective at covering fire as it is at sniper shots. It sounds like great fun, and would make a great Christmas gift for boys of all ages (hint, hint)! 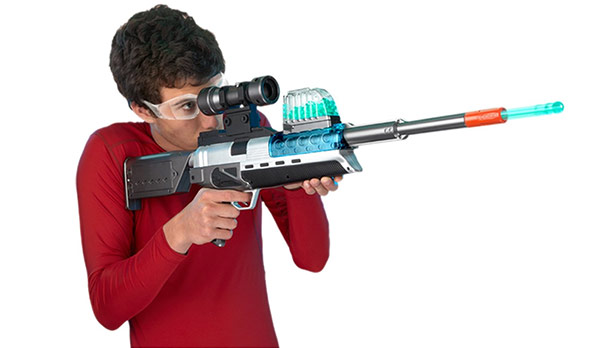 Combat hunger and zombies with this Zombie Ammo Lunch Box. Pack a lunch that packs a punch. This lunch box looks like an ammo tin, but it holds your food. It can be used to hold any zombie or non-zombie related items. Everyone who sees […]

When you send your kids back to school, you want them to have the best start possible and that means furnishing them with the best school supplies ever. The list for the year might’ve indicated the number of crayons kids would need, but it probably […]

There is a war on for your taste buds, so you better bring some ammo. This Chocolate Ammo Candy Making Kit is ready to make some amazing chocolate ammo that melts in your mouth, not in your gun. Great for parties and get-togethers or whenever […]

Perfect for ammo storage or for just storing your LEGO building blocks, the Zombie Ammo Can is a military styled dry storage box that offers you a unique way to keep things dry and safe. The double padlock tabs will ensure that whatever you place […]

With all the talk about Zombies and books like The Zombie Survival Guide and World War Z by Max Brooks, you better start fine tuning your hunting skills.  The Zombie Shooting Gallery is a fun and very cheap (on sale for $15) way to take […]

The radio-controlled Spyfire blaster is like an upgraded version of the Wireless USB Missile Launcher – now allowing you to fire it from up to 25 feet away instead of 15. Not only is it a powerful, battery powered, 4 shot blaster capable of blasting […]