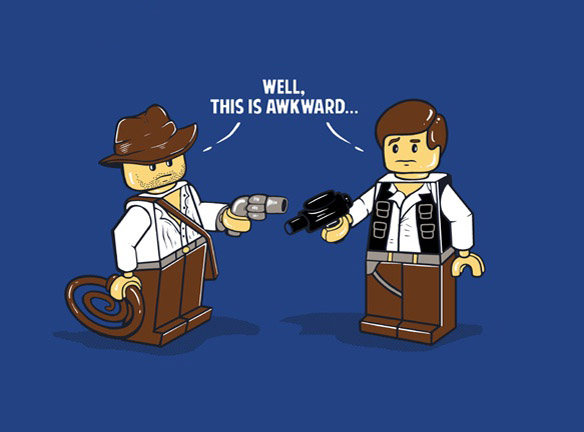 It’s the showdown you never thought would happen as two of Harrison Ford’s iconic characters encounter each other on the An Awkward Meeting T-Shirt.

Who shot first? The question takes on extra weight when, instead of facing Greedo, Han Solo is aiming his blaster at Indiana Jones. Fortunately, Indy has a bead on Han, too, so they seem to be at the point of talking it out.

The blue, 100% combed ringspun cotton tee features LEGO versions of Han and Indy facing each other with weapons drawn. Awkward doesn’t even begin to describe how they must feel… if LEGOs or artwork could feel, that is. The movie mashup was created by artist Jamie Marshal AKA BootsBoots. 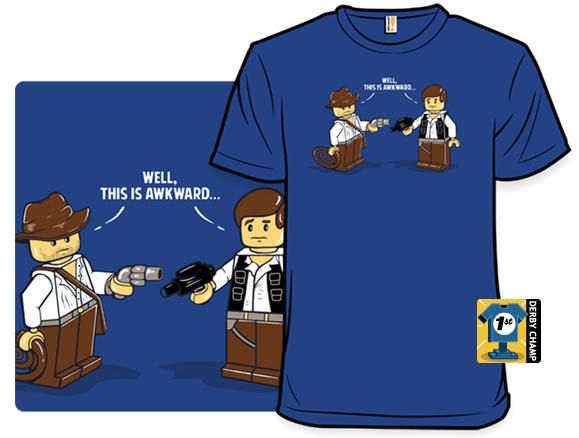 The An Awkward Meeting T-Shirt is available for $15 at Shirt Woot.

Awkward Moment at Work Game lets you compete to best handle those awkward work situations. 3-8 players can play, just prepare for an awkward time. Each turn, players try to impress “the Decider” by submitting the best reaction to the awkward moment from their hands […]

Family is awkward, so of course some family photos are going to be completely awkward too. And those are pretty funny. Now you can celebrate awkward family photos and keep track of the date with this Awkward Family Photos 2015 Wall Calendar. Each month features […]

Every family has their own awkward photos. That’s why the well known website is such a hit. We can all relate. Plus we just like to look at and laugh at awkward photos. If you like the website, now you can enjoy the new Awkward […]

Holy SUVs, Batman! This fiery-red Life-Sized LEGO Ford Explorer is completely made of our favorite toy bricks from wheel to roof.  It probably cost more to make the LEGO version than manufacturing a real Ford Explorer. Did they superglue every one of the 380,000 bricks they use, because my puny […]