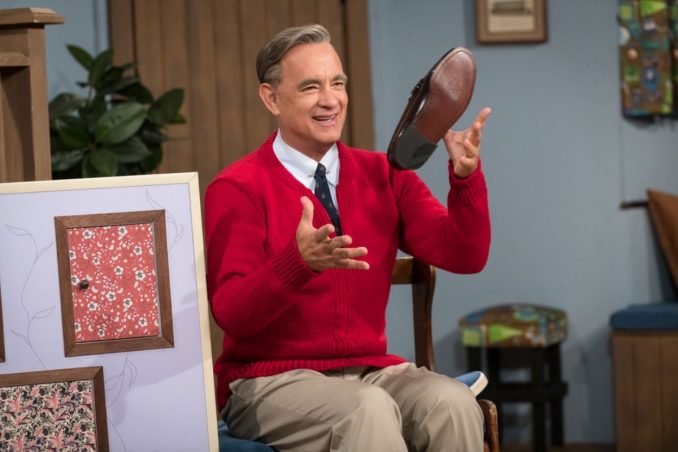 This Thanksgiving, Tom Hanks will be portraying Mister Rogers in a new film that you can preview now in this A Beautiful Day in the Neighborhood Trailer. This film, from director Marielle Heller, is based on the true story of Fred Rogers and journalist Tom Junod and the friendship that developed between them after the magazine writer is assigned a profile piece on Fred Rogers.

These days we don’t see enough real-life role models displaying empathy, kindness, and decency. If fact, if we hear these terms at all in the media, it is usually in cheap political attacks claiming the other side lacks these qualities, rather than someone personally demonstrating these qualities. Perhaps this movie is coming at the right time and can help provide an example for all of us to follow.

Besides for Tom Hanks starring as Fred Rogers, the cast also includes Matthew Rhys, Enrico Colantoni, Susan Kelechi Watson, and Chris Cooper. It is scheduled to open in theaters on November 22, 2019.

Watch the official A Beautiful Day in the Neighborhood Trailer from Sony Pictures:

It only takes one person to inspire a world of kindness. Based on the true story, A Beautiful Day in the Neighborhood in theaters this Thanksgiving.

Tom Hanks portrays Mister Rogers in A Beautiful Day in the Neighborhood, a timely story of kindness triumphing over cynicism, based on the true story of a real-life friendship between Fred Rogers and journalist Tom Junod. After a jaded magazine writer (Emmy winner Matthew Rhys) is assigned a profile of Fred Rogers, he overcomes his skepticism, learning about empathy, kindness, and decency from America’s most beloved neighbor.

We’ve seen bath ducks designed for Star Wars, Doctor Who, Zombies, Devils, and Astronauts, so why not Thanksgiving Rubber Duckies? With a really cheap price, and an assortment of Thanksgiving themed designs including turkeys, Pilgrims, and Native Americans, these are an inexpensive gift to give […]

Experience the wisdom of Mr. Rogers every day of the year, with this 2018 Mister Rogers Desktop Calendar. It includes inspiration and wisdom from Fred Rogers that will make your day better. Each page tears off. It is a 365-day Day-to-Day calendar for 2018. 2018 […]

Got a lot of magazines? You can either just stack them all up and store them in your cabinets, or put them up on a gorgeous display with the Magazine Globe. The globe is basically a colorful, steel framework where you’re supposed to insert your […]

I can’t wait for Thanksgiving so I can stuff myself with all of that good food. But if you want all of the taste of Thanksgiving, no matter what the date, and none of the actual food, then try these Thanksgiving Gumballs. Think of it […]