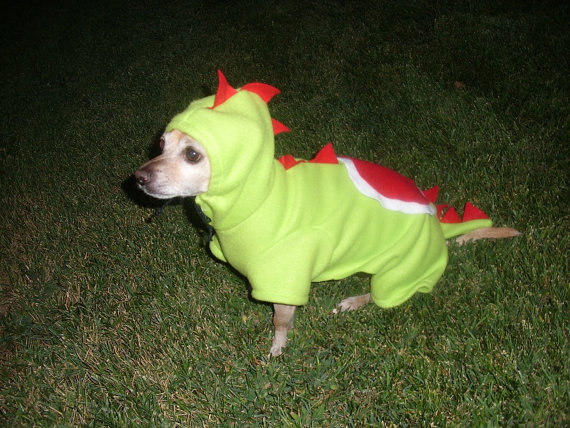 Dogs will do anything for a sweet or meaty treat. If that means getting dressed up for Halloween and going door-to-door for some free goodies, by golly they’re going to do it. Like kids, Rufus wants to dress in a character costumes. None of that generic witches and vampires business. He wants to dazzle the town in Star Wars Costumes or in the Yoshi Nintendo Dog Costume.

Not only are these costumes adorable, they also keep your puppy warm on cold nights and make perfect jammies. They also make it easy enough to play and run in but stay warm at the same time with an opening so your puppy can still go potty!

All sizes are Available, large dogs cost an extra $10 and very large dogs an extra $15
Just contact me and give me your dogs measurements such as:

All products are professionally constructed.

Yoshi is the trusty dino steed of Mario and his good buddies, frequently seen on Nintendo video games. Yoshi is ridden like a horse, but he also has dog-like characteristics such as being cheerful and loyal and jumping up high. It’s no surprise that Etsy vendor GypsyEyesClothing has created this brilliant Yoshi costume.

The dog model seen in the photos seems to be rather stoic. But he’s not bitter. He’s just working his serious face pose to market the product, like the supermodels do. But it’s actually a relief for him to be dressed as a beloved Mario character. He knows it won’t be long before the holiday sweaters for dogs come out.

Dressed as Yoshi, you’ll be sure to collect on those full-sized candy bars this year. But remember, chocolate is a no-no for dogs. Hopefully someone will have a stash of freeze-dried liver for Rufus. Get the Yoshi Nintendo Dog Costume for $35 and up on Etsy.com.

By the way, if you’ve got a pair of dogs, this costume maker also has Harry Pawter and Hermione Granger Dog Costumes.

I’ve wanted to get a puppy ever since I was a little girl, but it was near impossible then for me to go near one without sneezing around ten times every minute. My allergies and asthma has since tempered down, which is why I was […]

Are you looking for some neat stocking-stuffers these holiday season? How about the Nintendo Mario, Yoshi, and Princess Peach Lip Balms? These officially licensed lip balms are perfect for Nintendo fans on cold winter days. Choose from one of the three cool characters. Mario is […]

It’s cozy and it’s comfy and may even make you hungry for apples. This Yoshi Lounger is based on the popular Nintendo character. It features a Yoshi-head hood, saddle, and a tail! Now you are a dinosaur. Lounge like one. Yoshi Lounger Officially-licensed Nintendo merchandise […]

Yoshi fans can now have their very own Yoshi branded Nintendo 3DS XL. This Nintendo 3DS XL – Yoshi Edition looks great and combines next-generation portable gaming with 3D visuals-without the need for 3D glasses. You can take 3D photos, connect to friends and other […]

Most of the time, we feel sorry for dogs that are forced to wear degrading costumes. The Hot Diggity Dog Ketchup and Mustard, Heidi Oktoberfest, and Yoshi Nintendo dog costumes are some that could prompt dogs to voluntarily check themselves into the nearest shelter. Here’s one doggie fashion item that every dog […]

I love bacon, you love bacon, just about everyone loves bacon. Even dogs love bacon. Since you or I can dress up for Halloween in the Bacon Costume, it is only fair that this Bacon Dog Costume is available. Designed by Rasta Imposta, this dog […]

Before you know it, it’s going to be Halloween. It’s not just the children or the occasional adult who gets to dress up during this spooky time of the year. Let your beloved family pets join in on the fun (specifically, Fido the dog and […]

This Super Mario Yoshi SH Figuarts Action Figure brings Mario’s ride to life. It is fully articulated and measures over 4 1/4-inches tall. Yoshi comes with tons of accessories and you can even pose Mario and Luigi so that they are riding Yoshi. Throw an […]