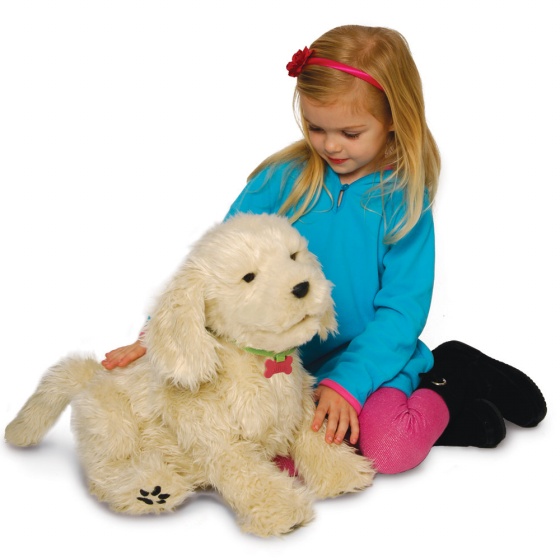 I’ve wanted to get a puppy ever since I was a little girl, but it was near impossible then for me to go near one without sneezing around ten times every minute. My allergies and asthma has since tempered down, which is why I was able to get my own precious puppy a few months ago. If for some reason you or your child can’t get a real live pet, then the Emotional Response Puppy sure comes close to the real thing.

The Emotional Response Puppy looks, feels, and acts like a puppy. Depending on your actions, it will respond appropriately, be it a bark, a whimper, or several wags of its tail. Pat its head and tickle its underbelly; this pup is programmed to mimic the responses of a normal (and extra obedient) puppy based on how it perceives your touch or voice. 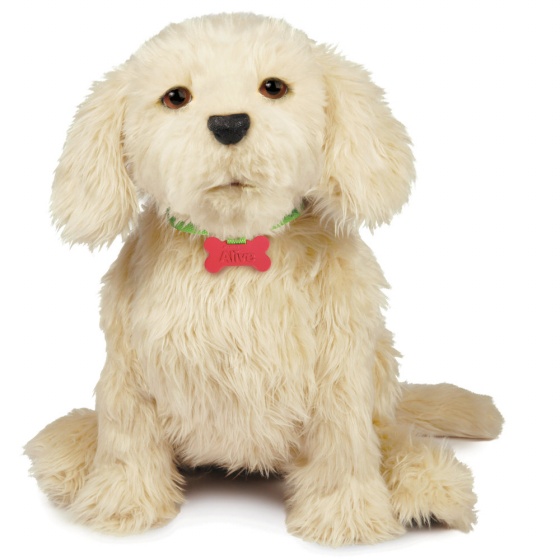 This is the plush puppy that mimics a real canine’s behavior when it feels a child’s touch or hears a sound. Beneath the puppy’s soft, furry coat are sensors in its paws, head, and back that, along with a built-in microphone, trigger lifelike canine responses when it is patted, tickled, stroked, or hugged. Depending on how it perceives the touch or sound, it opens its mouth while panting or barking, wiggles its ears, blinks its eyes, or enthusiastically wags its tail. The puppy’s actions are accompanied by any of 18 lifelike sounds, from a playful bark or a peevish grumble to a curious snuffle or a forlorn whimper.

The Emotional Response Puppy is available from Hammacher Schlemmer for $99.95.

The Plush Puppy Bouquet gives that special someone 6 plush puppies in a beautiful wrap. Dog lovers are going to flip for this gift. You get 2 corgi / chihuahua types + 2 chocolate lab / pit bull types + 2 bulldog / pug / […]

Give your pet the neatest bed ever with this Shark Puppy Bed with Pet Bed Mat. It’s funny when your pet sleeps within the jaws of the oceans top predator. This product may jump the shark, but it’s still pretty awesome. It not only looks […]

The roster of the Canine Justice League continues to grow with the Batman Robin Puppy Costumes T Shirt, featuring the Dog Knight and the Pup Wonder. Following in the footsteps of the Superman Superpug T-Shirt, this officially licensed tee features some… “unique” artistic skills to […]

This little Wireless Puppy Cam ($149) comes with a camera in a nose, which can transmit both audio and video to the handheld receiver.

If you love dogs, you know that you have to house train them right away to avoid big problems. It isn’t easy. It usually requires the clean up of many newspapers. The Puppy Potty Trainer – The Indoor Restroom for Pets can help.

Keep safe on your bicycle at night with the Blazing Skull Bicycle Tail Light With Laser Cannon Lane Markers. This bicycle tail light will not only keep you safe on the road, but it will also look cool on your bike. It features 5 lighting […]

HTC has announced a new model in their Touch line of mobile phones. The beautiful HTC Touch Pro slide-out smartphone brings together touch screen response with the direct precision of a QWERTY keyboard.

Although it is sleek and beautiful, the design of the Microsoft Arc Touch Mouse is actually very practical. It is flexible, so you can curve the MS Arc Touch Mouse for the perfect fit for you. When it comes time to travel, just flatten it […]

Getting a new puppy is always an exciting time for any family. However, when little Spot begins to bark endlessly throughout the night and starts giving every member in the household insomnia, then it’s time to bring out the big guns: the Sleepy Bunny.