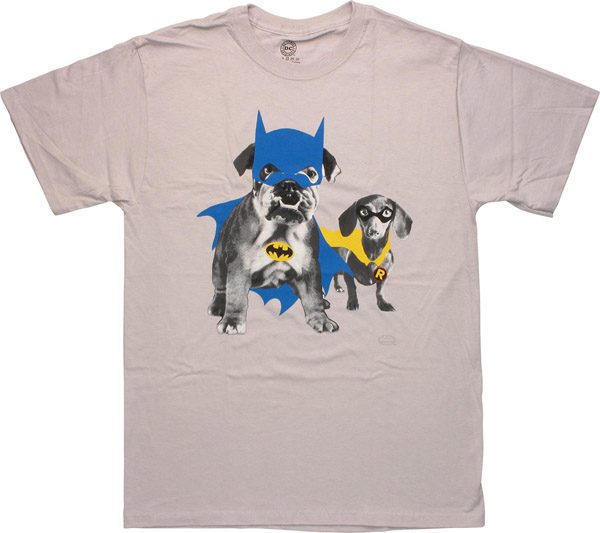 The roster of the Canine Justice League continues to grow with the Batman Robin Puppy Costumes T Shirt, featuring the Dog Knight and the Pup Wonder.

Following in the footsteps of the Superman Superpug T-Shirt, this officially licensed tee features some… “unique” artistic skills to transform two everyday canines into Batman and Robin. I can’t help but wonder how this version of the Dark Knight would get along with Catwoman. And do they stick their heads out the windows of the Batmobile as they race through the streets of Gotham City?

The Batman Robin Puppy Costumes T Shirt is available for $19.88 to $21.88 at StylinOnline.com.

I’ve wanted to get a puppy ever since I was a little girl, but it was near impossible then for me to go near one without sneezing around ten times every minute. My allergies and asthma has since tempered down, which is why I was […]

Give your pet the neatest bed ever with this Shark Puppy Bed with Pet Bed Mat. It’s funny when your pet sleeps within the jaws of the oceans top predator. This product may jump the shark, but it’s still pretty awesome. It not only looks […]

The Plush Puppy Bouquet gives that special someone 6 plush puppies in a beautiful wrap. Dog lovers are going to flip for this gift. You get 2 corgi / chihuahua types + 2 chocolate lab / pit bull types + 2 bulldog / pug / […]