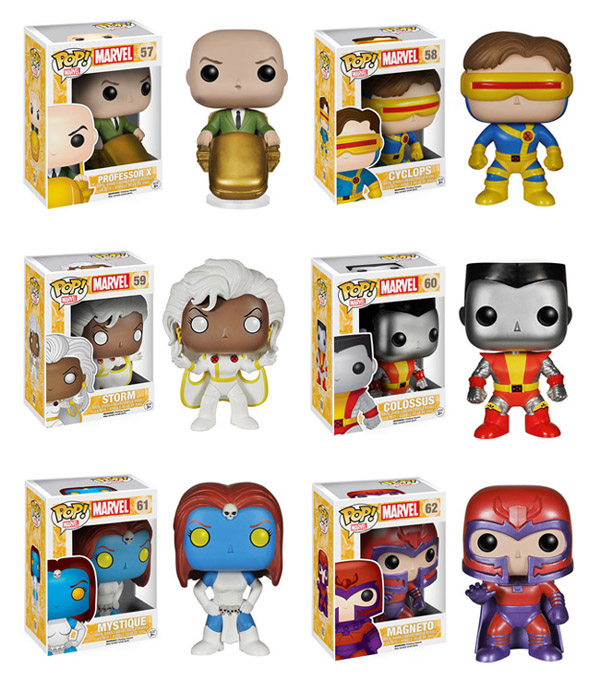 Celebrate the classic stylings of the X-Men Classic Pop! Vinyl Figures, featuring costumes that will be easily recognizable to X-fans that were following the mutant team long before they became a big screen sensation.

These 3 3/4-inch-tall figures are rocking some classic looks with costumes that are probably tucked way in the back of their closets these days. Magneto still has his fascination with red and purple, while Mystique looks deceptively innocent dressed in all white. Cyclops is looking like a leader in blue and gold, which provides a nice contract to another mostly white outfit worn by Storm, complete with cape that would flair out like giant fabric wings when she summoned to wind to lift her into the air. Meanwhile, Colossus shows off his shiny metallic skin by wearing as little actual clothing as possible. And nobody rocks a green suit like Charles Xavier… although that could simply be him using his mutant abilities to make us think he looks cool in that suit.

The X-Men Classic Pop! Vinyl Figures will be available December 2014 but they can be pre-ordered now for $9.99 each at Entertainment Earth. Choose from Magneto, Mystique, Cyclops, Storm, Colossus, and Charles Xavier/Professor X.

The master of magnetism and cool helmets is ready to bring you into his world (as slaves) with the Magneto & the Brotherhood of Mutants Art Print. The sometimes-foe-sometimes-friend of Charles Xavier displays his magnetic personality on this colorful 24″ x 18″ print. Limited to […]

He might not get a lot of love from Hollywood but you can show your appreciation for one of the strongest mutants in the X-Men with the Colossus Premium Format Figure. Everyone thinks Wolverine is tough because of his adamantium claws but Colossus brings a […]

The Marvel X-Men Mystique T-Shirt won’t let you shapeshift but it will help transform your style from meh to marvelous. Featuring sometime-villain/sometime-hero Mystique on the front (the comic book version; sorry Jlaw fans), this 100% cotton tee is the perfect addition to your mutant-loving wardrobe. […]

The sexiest shapeshifter in the Marvel universe gets a brand-new look with the X-Men Mystique Collectible Statue by Rockin Jelly Bean, blending an assortment of styles into one highly-detailed, 9.5-inch PVC statue. Mystique always got attention in her sexy, white, slit-up-to-there dress, with the skeleton […]

The X-Men get a Star Wars look with the X-Men Mutant Wars T-Shirt, and the result is pretty cool. A long time ago (1963) in a galaxy far, far away (New York), a man by the name of Charles Xavier brought together a group of […]