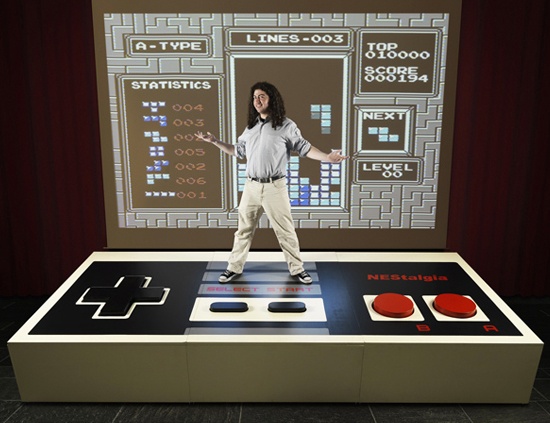 The idea to build the largest gaming controller of all-time hit Ben when he was at his local pub. Thus the plans to build the 144 in. x 62 in. x 20 in. controller were drawn up. Ben unveiled his creation at London’s Liverpool St. station, where the Guinness World Records 2012 Gamers Edition was kicked off.

The best part about this gigantic NES controller is that it actually works–although you can’t really play a game solo. But that’s easy to solve, though. Just grab a partner and coordinate as you jump, press, and step on these buttons to play the game.

It’s obvious that something this big wasn’t cheap to make, either. Allen, who is a student from the Delft University of Technology, revealed that he actually spent over $6,000 to construct the giant controller.

Some video games can be pretty intense. Even with the air conditioning on full blast, I find myself sweating buckets–and don’t even get me started on my hands. (Gross, I know.) That also leaves me with pretty icky controllers. If you’re a jumpy gamer like […]

We gamers love our consoles and of course the various controllers that go with them. What better way to celebrate both your favorite controllers and Christmas, than with this awesome Classic Video Game Controller Ornament Set? You get a set of four ornaments that look […]

When you want to play your your favorite SNES games using the Wii Virtual Console, you will want to use this Classic Super Famicom Controller For Wii to play them how they were meant to be played. And besides this is way more comfortable than […]

Amp up your controller while playing your favorite games on your Xbox 360 with the Avenger Controller. It’s not just an adapter to make your controller look extremely cool and bad-ass, because it can also help you play better and get better control thanks to […]