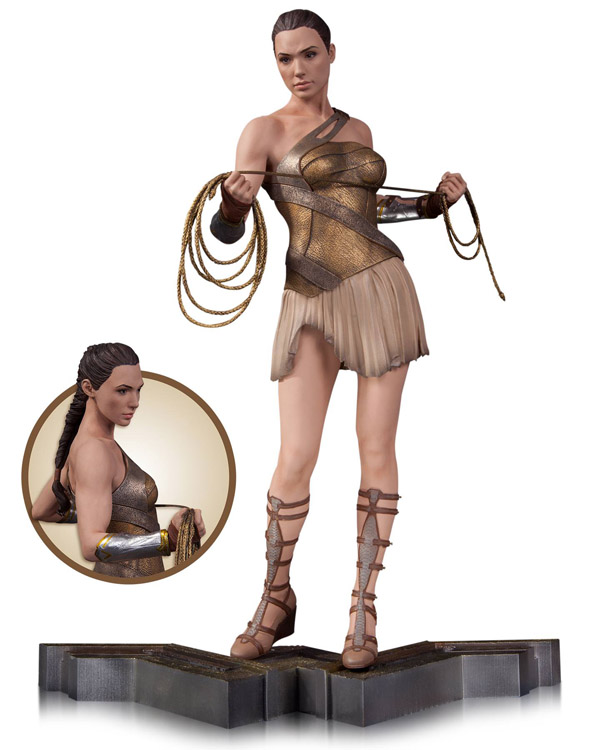 Witness an Amazon in training with the Wonder Woman Training Outfit Movie Statue.

Before she could wear her iconic red and blue armor, Princess Diana of Themyscira had to train to become as tough as she is, and that meant wearing a training outfit while learning to fight in a world inhabited by men from other planets and men who dressed as bats.

Based on Gal Gadot’s Wonder Woman in the upcoming movie, the 12-inch-tall statue features the Amazon warrior standing on a base in the shape of the Wonder Woman logo.

Hand-painted and made from cold-cast porcelain, the statue is limited to just 5000 pieces.

The Wonder Woman Training Outfit Movie Statue will be available June 2017 but it can be pre-ordered now for $149.99 at Entertainment Earth.

Diana gets ready for war as the Wonder Woman Training Costume Statue. When she goes out into the world, determined to help Steve Trevor stop World War I, Diana will be wearing her iconic red and blue armor, but when she first begins training, she’s […]

All the world is waiting for you and the powers you possess so put on the Wonder Woman Workout Outfit and boost that power to superhero levels of awesomeness. Make you can’t make a hawk a dove or stop a war with love, but that’s […]