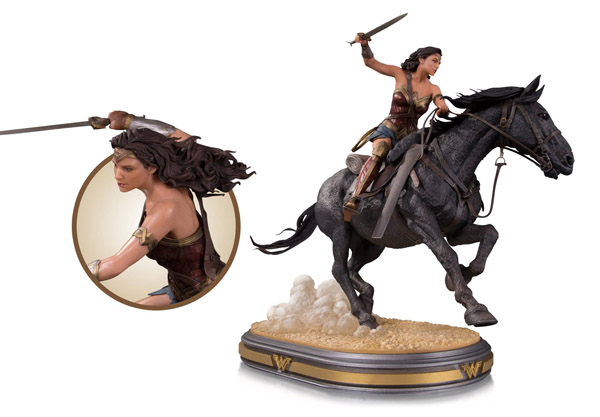 Ride into action like an Amazon warrior with the Wonder Woman on Horseback Deluxe Movie Statue.

Based on Gal Gadot’s portrayal of the character in the Wonder Woman movie, this 12-inch-tall statue features Wonder Woman riding into action on a horse captured in mid-gallop, it’s feet kicking up dust as it charges into battle.

The hand-painted statue, made from cold-cast porcelain, is limited to just 2,500 pieces.

The Wonder Woman on Horseback Deluxe Movie Statue will be available June 2017 but it can be pre-ordered now for $349.99 at Entertainment Earth.

Witness an Amazon in training with the Wonder Woman Training Outfit Movie Statue. Before she could wear her iconic red and blue armor, Princess Diana of Themyscira had to train to become as tough as she is, and that meant wearing a training outfit while […]

The Little Tikes Deluxe Ride Wagon is to kids what the party limo is to adults. What could be better than being towed in the comfort of a shaded wagon with your BFFs, while having your most favorite treats and drinks at your fingertips? Not a whole lot, I tell ya. Hey, […]