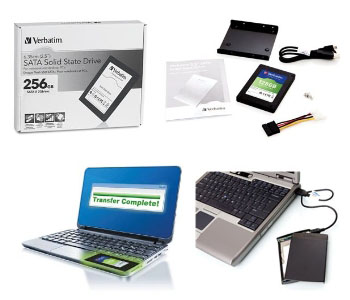 Are you looking to get a little more performance out of your laptop and gaming PC without having to purchase a new system. Verbatim, a global leader in data storage technology, just announced their 2.5″ SATA Solid State Drives and Upgrade Kits at the CES 2012 show in Las Vegas.

You can look to purchase the Verbatim 2.5″ SATA Solid State Drives and Upgrade Kits at retailers like Newegg.com and Amazon.com.

If you’re a PC gamer facing slow frame rates, upgrading your graphics card generally gives you the best improvement. Yet for many of us that generally do office work and web browsing on the computer, a faster I/O subsystem would deliver the most noticeable speedup. […]

Flash drives have become a big part of our daily lives. Whether we are using them for school, work or play, it’s always nice to have a fast and reliable USB flash drive handy. GeekAlerts has shown you products from Verbatim in the past, and […]

Verbatim just announced today that their Wireless Bluetooth Mobile Keyboard for iPhone and iPad is now shipping to retailers nationwide. This ultra-slim foldable keyboard is designed to work with Bluetooth enabled iPhones and iPads, making it much faster to type long messages.

Verbatim, the global leader in data storage technology and accessories, just announced the release of the Verbatim Ultra-Slim Bluetooth Wireless Mobile Keyboard. Available in black or white, this Bluetooth keyboard is .2 inches thin and 8.7″ long x 4.7 wide. Perfect for the person on […]

This multi-function desktop gadget will provide you with a 2.5-inch SATA HDD dock, a 2-port USB 2.0 compliant hub, and a 3-slot card reader.

This dock / 4-port USB hub combo makes it easy to backup and transfer data via USB by plugging in any 2,5 or 3,5 inch SATA hard disk in the device.