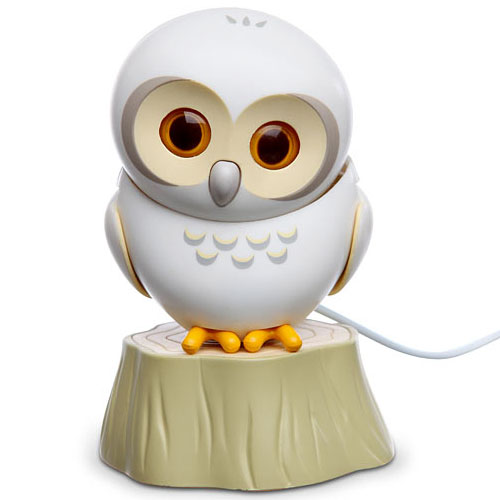 Owls seem to be popping up everywhere; even as computer accessories. How these creatures love to tug at our heartstrings! Who can resist their big, round eyes, the way they do that rad 360 move with their heads, and their overall pudgy cuteness? We’ve shown you some fancy owls that plug into USB outlets, such as the Owl Flash Drive Keyring, Owl USB Drive, and this jewel-encrusted Owl USB Flash Drive. Another owl to join the gang is this USB Owl that hangs out at your desk to keep you company. 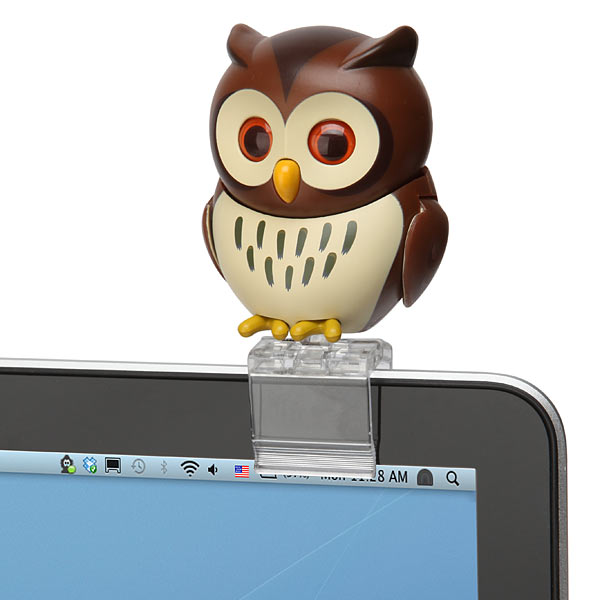 Once the owl is connected to a USB outlet, it’ll twist its head in a U-motion with its eyes closed. Then it will wake up and open its eyes. The USB Owl operates in three different modes; active, slow, and sleep. It would be fun to have a whole colony of these owls. Actually, the correct terminology would be a whole “parliament” of owls.

The round-headed one must be inspired by the snowy owl, and the pointy-eared one takes after the great-horned owl. Each of these adorable owls comes perched on a tree stump.

Find out who’s who among animated USB toys when you check out the USB Owl. Available at ThinkGeek for $19.99, Amazon.com for $27, and at the Japan Trend Shop for $33.

We love creatures of all types at GeekAlerts. We love dogs, fish, cats, lizards, snakes, bugs, Domos, Twitter birds and owls. Maybe it’s because non-human creatures tend to understand us better and never readily judge us. Or at least they aren’t too good at expressing in […]

If you’re a night person, you need to sleep during the day when sunlight can make sleeping difficult. Block out the sun and look super-cute with these Night Owl Sleep Masks. These are also a must-have if you have a roommate that wakes up before […]

Even though I’ve never cuddled a real owl before, it would be the one bird I’d want to cuddle most. Owls are soft, round, have beautiful eyes, and they have this mystical quality about them. While most of us will never know what cuddling an owl is like, at […]

I guess the giant from the 90s television series Twin Peaks by David Lynch was right when he said that “the owls are not what they seem” – at least when you look at this blingy keyring owl, which hides a USB flash memory in […]

The latest example of those weird USB products – a “cute and friendly-looking wise little owl that’ll bring a touch of magic and wisdom to any workspace”. With a clip that allows him to perch on top of computer monitors, as well as an optional […]

If the colors on the owl from the USB Flash Drive Heroes series didn’t match your other gadgets, here’s a chance to get a slightly different model in other designs.

Let’s kick start this week with yet another example of a storage device that has been designed like a piece of jewelry – this time a 2GB USB drive in the shape of an owl.