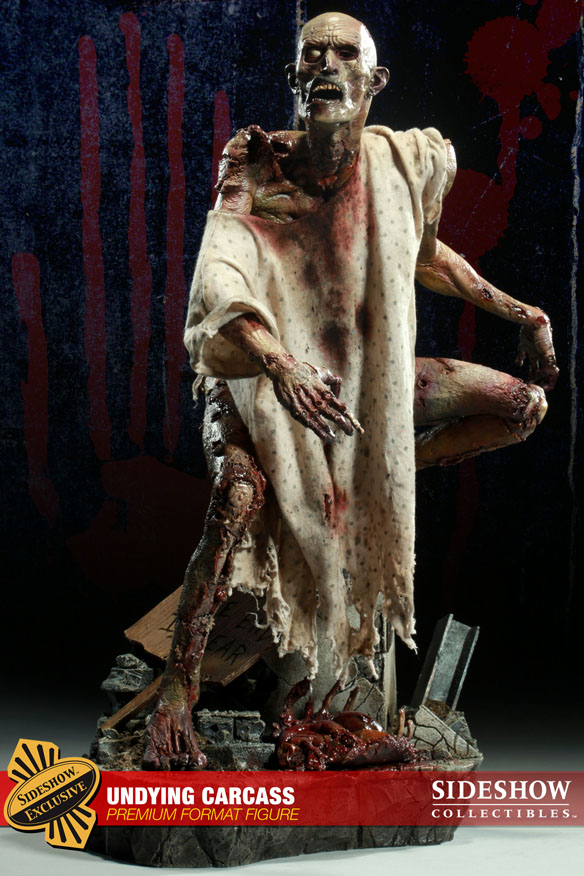 Fans of The Walking Dead and all things zombie will go crazy for this Undying Carcass Premium Format Figure. It’s about as freaky as you can get without actually bumping into an animated corpse while out late at night picking up a gallon of milk.

While their number one goal in death is to attack unwary (or just plain slow) individuals and feast on their brains, the great thing about zombies is that they really can’t pull off a sneak attack. I mean, vampires look normal until they whip out the fangs and bury them in your neck, but this guy? Not a chance. You can tell from a mile away that he’s seen better days and that mingling with him in his current condition might be a bad idea.

As if the corpse didn’t look bad enough in his ratty robe, you can amp up the freak show by showing him in all his ghastly glory by removing the robe.

But clothes aren’t the only thing this poor guy can lose. The Sideshow Exclusive version of the Undying Carcass Premium Format Figure includes a switch-out head that lets you see what’s under the skin, revealing a face that only a mother could love… and then only if she was infected by the zombie virus, too.

There are only 400 of these limited edition figures so zombie fans don’t want to waste any time. You can get the Undying Carcass Premium Format Figure for $249.99 (reg. $284.99) at Sideshow Collectibles.

You’ll say ‘I do’ when given the chance to slip into the Corpse Bride Dress and Corpse Bride Leggings, adding a festive and macabre spirit to every place you go. Victor and Emily, from Tim Burton’s “The Corpse Bride,” finally found their happily-ever-after, and you […]

Do you have a young Padawan that hates showering or taking baths? Have you already told him/her that dirtiness leads to the Dark Side and still no luck? Then this sounds like a problem for a Jedi Master; sorry mom and dad, this is above […]