The Ultron Classic Edition Sixth-Scale Figure has arrived and he’s ready to take over the comic book universe.

The evil AI caused plenty of trouble for the Avengers on the big screen but this 13-inch-tall figure made his first appearance in Marvel Comics way back in the sixties. Instead of being created by Tony Stark and Bruce Banner, this version of Ultron was invented by Hank Pym. He still has that insatiable desire to destroy humanity, though. 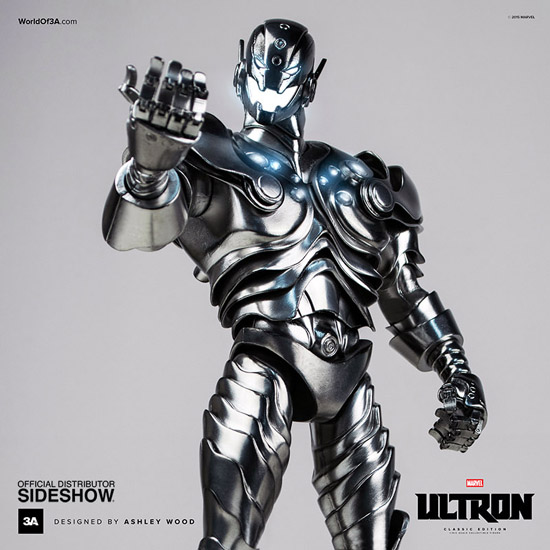 The Ultron Classic Edition Sixth-Scale Figure will be available Nov 2015 – Dec 2015 but it can be pre-ordered now for $220 at Sideshow Collectibles.

There are no strings on the Ultron Mark I Sixth-Scale Figure, but there is an incredible amount of detail. Standing almost 13-inches-tall, the Mark I version of Ultron looks like it had a very rough day, but the rogue AI is still determined to defeat […]

There are no strings on the Ultron Prime Sixth-Scale Figure… but there are a few cool lighting effects. Everyone knew Ultron was going to be a memorable villain even before we saw the trailer for the Avengers sequel and this mechanical baddie is now ready […]

The newest member of the Marvel super-team joins the group with the Avengers Age of Ultron Vision Sixth-Scale Figure. For those who haven’t seen Age of Ultron yet (what’s wrong with you?), you need to be aware the following description contains a few spoilers from […]