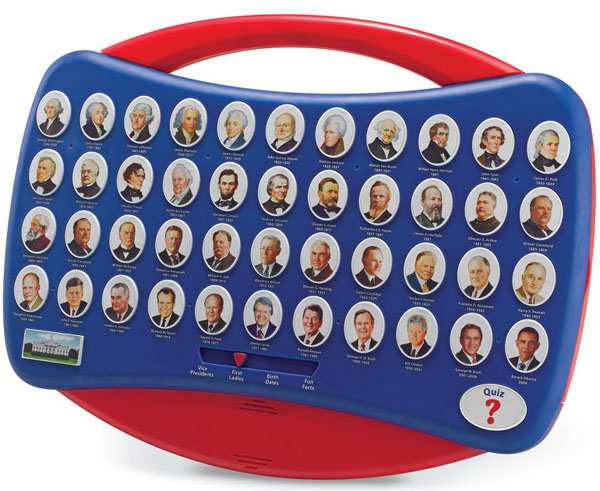 One subject that I was never good at when I was still in middle school was history. I always had some trouble memorizing the presidents and their order and the stuff that they did while they were in office. If you’ve got a kid with the same woes (and you happen to live in the United States), then here’s something that can definitely help them in that department: The U.S. Presidents Talking Game.

The U.S. Presidents Talking Game has 44 buttons (one for each president, obviously). Switch it on and the game starts rattling off random factoids and trivia about a certain president’s accomplishments or achievements. It’s a lot more fun than just cracking your book open, that’s for sure.

This is the portable quiz game that makes learning about U.S. presidents an engaging and interactive experience. The tablet has 44 buttons (one for each president) and four game settings. In “Fun Facts” mode, the game lets children explore notable details about each leader, from Roosevelt’s leadership through World War II and the Great Depression to Reagan’s status as “The Great Communicator.” The game also has settings for teaching birth dates, vice presidents, and first ladies for each president, using information from Encyclopedia Britannica’s student edition. A “Quiz” button tests childrens’ memories about the facts they’ve heard.

The U.S. Presidents Talking Game can be purchased online from Hammacher Schlemmer for $39.95.

Current Hammacher Schlemmer Coupons When it comes to unique gift ideas and cool gadgets, Hammacher.com is one popular online store. However, this shopping choice has a problem in that the regular prices aren’t very cheap. The solution is to check our listings of Hammacher Schlemmer […]