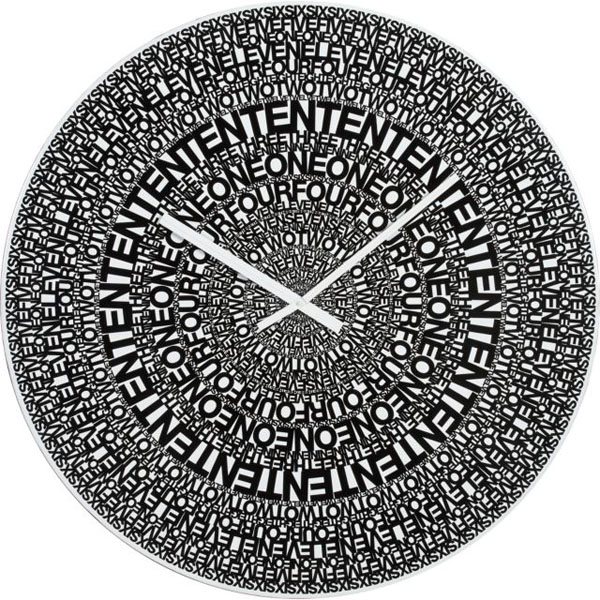 There’s something about black and white busy patterns that bring our neurons to a standstill. This timepiece is called the Type 39″ Clock, but I’m convinced that it’s actually a device that turns humans into cross-eyed zombies.

Clock. 39″ dia. name the hour. Big-time graphic spells out the hours one through twelve in radial black typography powdercoated on white metal. Hands and rim are up to the minute in brite white. ‘Twould be a shame to put artwork like this under glass, so we didn’t.

Is there a subliminal message embedded in this thing? The clock hours are uniformly printed repeatedly in capital lettering, but each series of spelled-out hours appears in variable font sizes. The letters are written in rows of concentric circles with no spaces in between, thus creating a mesmerizing effect.

Though this clock isn’t as geeky as some of our other featured clocks, like the Frying Pan Egg Omelet Clock, Star Trek Warp Speed Clock, or Melting Shelf Clock, it has this quiet geeky, zombifying force about it. Its rather large diameter makes it ideal for covering a large chunk of space.

Clocks can’t get any geekier than this. The Purple Motherboard Pendulum Clock that was previously featured here on GeekAlerts definitely had a lot of appeal. The DIY Wall Clock was a pretty neat concept, too, because it provided you with the framework you needed to create […]

You can literally go back in time to the Stone Age with this 4th Dimension Concrete Clock. It’s (obviously) made out of cement, so we advise that you make sure you’ve fastened it properly and well on the wall, lest you’ll end up with a […]

Joining the minimalist and simplistic ranks of the Poketo! Icon Clock and the Beautiful Minimalistic Alarm Clock is the Contemporary Magnetic Ball Clock. Like most other minimalist stuff, you can expect this timepiece to do away with the usual hands that you use to read […]