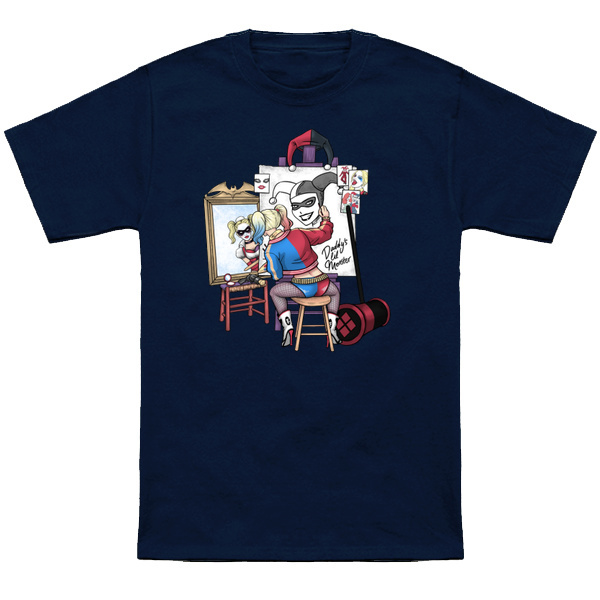 Harley Quinn gets in touch with her other selves through art with the Triple Harley Portrait T-Shirt.

Batman did it. Joker did it. Now it’s time for the Clown Princess of Chaos to reveal alternate versions of herself as she attempts to capture the real her on canvas.

The latest Suicide Squad version of Harley is painting her classic self (complete with harlequin outfit) as she looks in the mirror at a reflection that looks like the Harley who exists in the Arkham video games.

Artist Jacey Chase has done a great job of capturing a variety of Harley’s signature items, such as the pop gun with the cork in the barrel and the over-sized mallet. There’s even a shout-out to her gal-pal Poison Ivy and the Batman himself, thanks to the bat on the mirror. 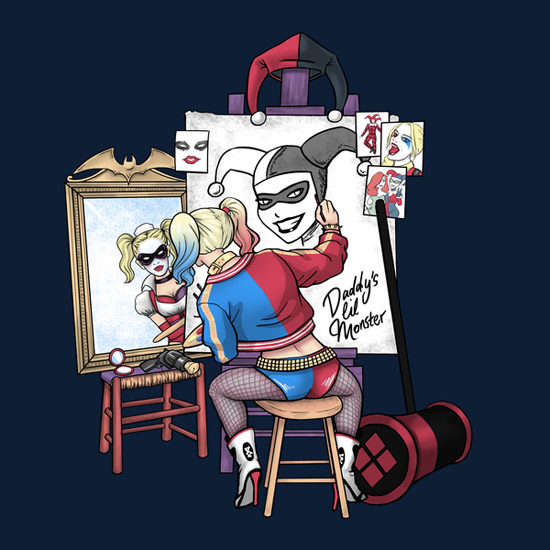 The Triple Harley Portrait T-Shirt is available for $19.95 at NeatoShop.

I have yet to meet a person who dislikes champagne. It’s such a special drink that you cannot even call it ‘champagne’ unless it has been produced within the lands of Champagne, France. Snooty, snooty! In addition to its sparkly appearance and good taste, we love it for being the highlight of joyous […]

The Caped Crusader paints the Dark Knight on the Batman Triple Knight T-Shirt, giving us a variety of looks for Bruce Wayne’s masked alter-ego through the years. Scott Neilson Concepts gives a Bat-spin to a Norman Rockwell classic, with Batman using his reflection to paint […]

My dad brings out a bottle of wine when there’s something worth celebrating about: when I graduated with honors, when my sister gave birth to his first grandchild, and when said grandchild skipped a grade in elementary school. Now that’s a whole lot of cork-popping […]

If you stare at this mirror long enough, then sooner or later, the logo if a well-known and iconic logo will just jump out at you (hint: the mirror is named after the winged hero himself.) The Bat Mirror features an ornate and classic design […]

Celebrate some serious Harrison Ford goodness with the Indiana Solo Hero Self Portrait T-Shirt. Unlike his Star Wars co-stars, Ford has had the good fortune to become associated with not just one, but two, iconic characters. Sure, Mark Hamill carved out a nice little career […]