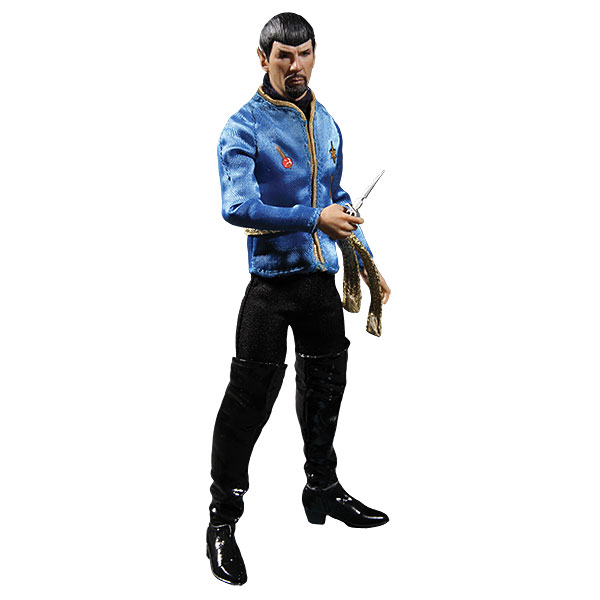 Trade the Federation for the Empire with the Star Trek Mirror Mirror Evil Spock Action Figure.

He’s still the First Officer of the Enterprise and he still uses logic to make decisions but Mr. Spock is looking stylishly savage with that goatee. Standing 6 1/2-inches tall, and exclusive to ThinkGeek, this action figure feature’s Leonard Nimoy’s evil Mr. Spock as he appeared in the Star Trek episode, Mirror, Mirror, complete with accessories that may or may not help him steer the future in a different direction, as suggested by Captain Kirk.

Mirror Mirror was one of the best episodes of the original Star Trek series. The crew ran into mirror universe versions of themselves and it was amazing. If you liked the episode, you will want to drink up with this Star Trek Good Spock and […]

Cold, logical, murderous, cute. Those are the best words to describe the Trekkies Mirror Spock Q-Pop Figure. Mr. Spock has always seemed cold and emotionless at times but his counterpart from the mirror universe takes those traits to an extreme level, surviving in a universe […]

Relive the classic Star Trek episode “Mirror, Mirror” with this Star Trek Mirror Universe Retro Cloth Action Figure Set. Spock with a beard? Has the whole universe gone crazy. Yes it did, for one amazing episode anyway. These figures are Kirk and Spock as they […]

It’s not practical to carry around full sized phasers. This Classic Star Trek Phaser Mini LED Light is the perfect size for you to carry with you at all times. You never know when an alien might attack. Be prepared. This tiny version of the […]

Change your channel like you are firing at a Klingon thanks to this Star Trek Original Phaser Universal Remote Control. This future weapon will control your TV, iPod & other gadgets with multiple gestures. This highly-detailed and accurate replica is fully functional and even has […]

This Star Trek Spock Oven Mitt is perfect for baking Vulcan goodies in a warm oven during the fall months while wearing this I Am Spock Vulcan Hoodie at the same time. Bake long and prosper. It’s a logical accessory if you want to avoid […]