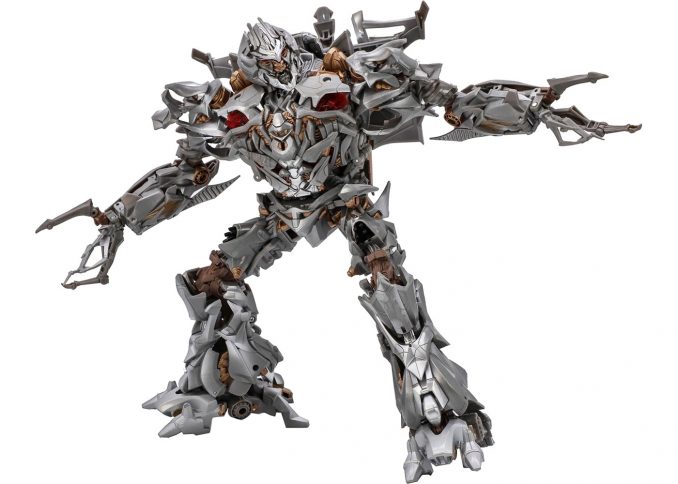 Based on the Transformers (2007) movie, this Megatron MPM-8 is part of the Transformers Masterpiece Movie Series of ultra-premium action figures. It stands about 12 inches tall and features an incredible 43 points of articulation. This means you can pose this Decepticon leader just about any way you want, with even the hands and mouth adjusting.

Since Megatron is a Transformer, this action figure can also transform from robot, through a series of 50 steps, to Cybertronian jet. It also comes with awesome accessories: Chain Whip, Fusion Cannon, and an Allspark Cube.

With features inspired by the explosive 2007 Transformers live-action movie, Masterpiece Movie Series Megatron MPM-8 measures about 12-inches tall and is a perfectly authentic figure for fans and collectors alike. It showcases the merciless Decepticon leader with impressive attention to detail and includes articulated hands and mouth (some of that die-cast metal detailing), plus Fusion Cannon, Chain Whip, and Allspark Cube accessories. Megatron converts from robot to Cybertronian jet mode in 50 steps and features 43 points of articulation. This ultra-premium Transformers Masterpiece Movie Series Megatron MPM-8 – Exclusive is a must for any Transformers collection!

This Transformers Masterpiece Movie Series Megatron MPM-8 Figure is coming to Entertainment Earth in September 2019. You can pre-order it now for $159.99 and be one of the first to get it when it ships.

There’s really not more than meets the eye to the Megatron (Transformers Generation 1) Statue, but it’s still very cool. Standing approximately 23-inches tall and based on the Decepticon leader’s look in the classic Transformers animated series, Megatron is prepared to wage war against the […]