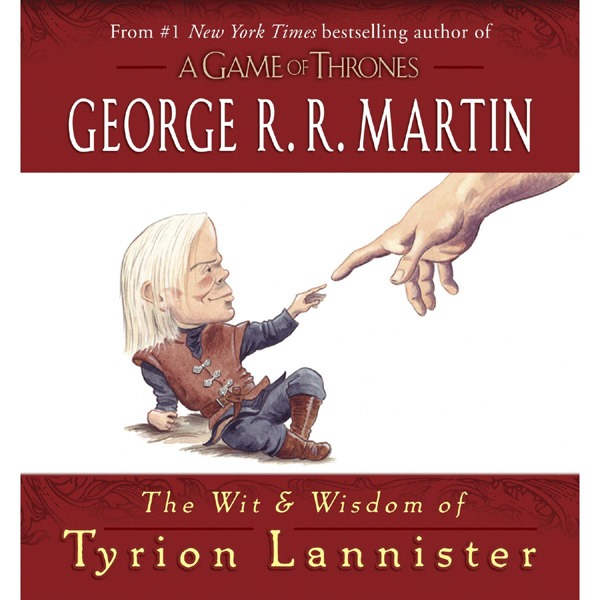 The HBO series, Game of Thrones, tells an epic story with a cast of characters so large it boggles the imagination, but it’s one of the smallest characters that gets his own book with The Wit and Wisdom of Tyrion Lannister.

Literally looked down on by everyone, and viewed with exceptional scorn by his own family, Tyrion seems to have a lot to be depressed about but the wily Imp, brought to excellent life by Peter Dinklage, is never at a loss for words, and now his sharp-tongued remarks can become part of your verbal arsenal.

Although you don’t live in fictional Westeros and you’re not trying for the Iron Throne, you should be able to find a way to work gems such as “The young ones smell much better, but the old ones know more tricks” and “A sword through the bowels. A sure cure for constipation” into your everyday conversations.

The Wit and Wisdom of Tyrion Lannister is available in hardcover for $10.56 and for the Kindle for $5.99 at Amazon.com.

Are you on team Lannister? Then you better wear the team colors with this Game of Thrones Lannister Football Jersey. You have to wear the right colors or you won’t get far in your quest for the iron throne. This 100% polyester Game of Thrones […]

This Game of Thrones Lannister Wallet is exactly what fans of house Lannister need to protect their money. It has the Lannister lion on the front to make your enemies tremble in fear. It also has “A Lannister always pays his debts” on the back. […]

Game of Thrones: A Pop-Up Guide to Westeros

The Iron Throne is the ultimate chair and Game of Thrones: A Pop-Up Guide to Westeros is the ultimate book, offering a wide variety of looks that let readers get up close and personal with the world that exists in the popular HBO series. While […]

Geeks are often looked at with scorn. However just as you shouldn’t judge Yoda by his size, you should not judge a geek by his looks. Geeks can be wise. Especially if they have this Geek Wisdom book.