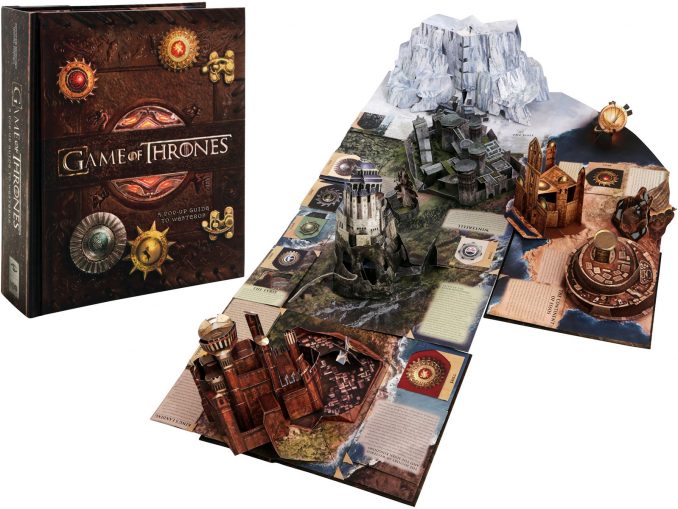 The Iron Throne is the ultimate chair and Game of Thrones: A Pop-Up Guide to Westeros is the ultimate book, offering a wide variety of looks that let readers get up close and personal with the world that exists in the popular HBO series.

While it’s not as detailed as the Game of Thrones 3D Map of Westeros Puzzle, this pop-up book is still pretty awesome, featuring recreations of several locations visited by characters such as Jon Snow, Arya Stark, Tyrion Lannister, and many others, along with creatures like Direwolves and White Walkers.

In addition to the individual scenes, the whole book folds out for a massive pop-up map of Westeros.

Inspired by the Emmy Award–winning title sequence that opens each episode of the hit HBO series, Game of Thrones: A Pop-Up Guide to Westeros is guaranteed to thrill the show’s legions of fans. Featuring stunning pop-up recreations of several key locations from the series, including the formidable castle of Winterfell, the lavish capital city King’s Landing, and the Wall’s stark majesty, this book takes readers into the world of the series like never before.

Game of Thrones: A Pop-Up Guide to Westeros features five stunning spreads that fold out to create a remarkable pop-up map of Westeros, as well as numerous mini-pops that bring to life iconic elements of the show, such as direwolves, White Walkers, giants, and dragons. All the pops are accompanied by insightful text that relays the rich history of the Seven Kingdoms and beyond, forming a dynamic reference guide to the world of Game of Thrones.

Visually spectacular and enthrallingly interactive, Game of Thrones: A Pop-Up Guide to Westeros sets a new standard for pop-up books and perfectly captures the epic scope and imagination of the series.

Game of Thrones: A Pop-Up Guide to Westeros is available for $65 at BoxLunch. You can also find it at Amazon.com.

Do you know your way around Westeros? It’s always good to consult a map. And now you can have the full map of Westeros displayed across three mugs with this Game of Thrones Map of Westeros Mug Set. When stacked they show the whole of […]

If you know someone who loves Game of Thrones (who doesn’t?) and wine (umm, again?), this Game Of Thrones Map Marker Wine Stopper Set would make the ultimate Christmas gift. It features 6 wine stoppers featuring the emblems of the houses of Stark, Frey, Greyjoy, […]